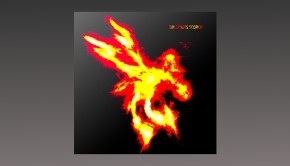 Swindon band Tin Spirits return with their second album to the introductory slowed down sound of a match being struck... Read More →