Lazuli have, over the last decade and more, become one of the finest live bands in the world, thrilling audiences... Read More → 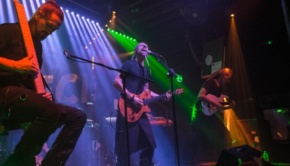