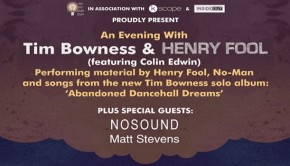 Tim Bowness and Henry Fool have announced two UK gigs in July where they will be performing material by no-man,... Read More →