Follow up to the first Twinscapes, Vol.2 further probes the intriguing possibilities presented by a big bottom. A synergistic collaboration... Read More → 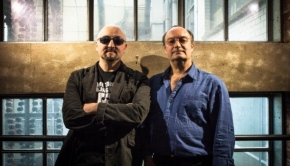