AKKU Quintet seem to be part of a modern Swiss tradition of cyclical minimalist music, where the beginning is the... Read More → 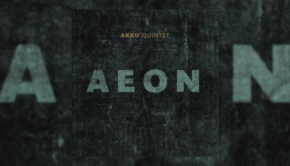