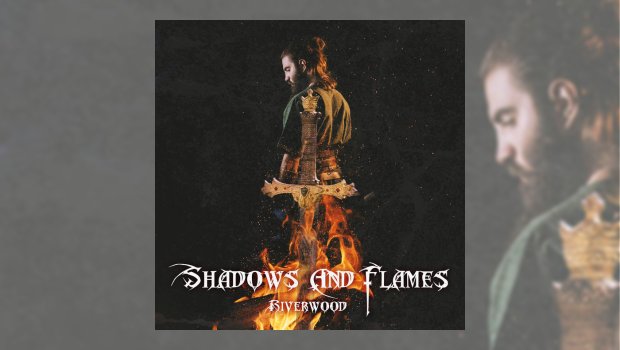 Riverwood is a progressive metal band from Egypt, and without writing a further word, I imagine for a lot of people they are already imagining comparisons to bands like Tunisia’s Myrath, or Israel’s Orphaned Land. Given that Egypt is the point where Mediterranean Africa meets the Middle East, it would probably be a surprise were these comparisons not to spring to mind. But I’m not at all convinced they are valid. While they might make a convenient reference point, the comparison is superficial at best. There is no real similarity to either Myrath or Orphaned Land, except for the fact that all three play a form of progressive metal, and utilise traditional instruments and instrumentation in their music. While I expect that Riverwood and Myrath might share some influences from power metal, and Riverwood and Orphaned Land some influences from progressive death metal, you’d never confuse or mistake any of these three bands for another. There’s one more thing that sets Riverwood apart even further, and that is for all the Egyptian folk that makes up their music. There also seems to be quite a bit of Nordic folk, too! There is a curious mixing of Arabian, Scandinavian and European musical cultures, on 2022’s double album Shadows and Flames, which is quite enchanting. This apparent oddity became clear to me after a little online exploration. I wanted to see if I could identify any of the characters and/or plot for Riverwood’s album, and discovered that a fantasy video game (The Elder Scrolls V: Skyrim) is clearly a huge influence for the band.

I’ve never really been a gamer, so I admit to having never heard of Skyrim – which is perhaps surprising, as it appears to be one of the best-selling video games ever, and is often ranked the number one video game of all time. Even the band’s name would appear to have come from this video game. (The lyrics to the opening number probably make a lot more sense to Skyrim players than they do to me.) This explains, at least to me, why there is an otherwise somewhat strange mix of cultural and musical influences on this album. Geographical specificity is simply unnecessary when it’s describing a fantasy world, that (although I’ve not played it) probably picks and chooses from multiple cultures, traditions, and histories to create its own unique world. It also explains the fantastical vibe of the album, that had me imagining a world of Dungeons and Dragons (or, possibly more aptly in recent times, Game of Thrones). So, as much as some people might expect me to compare to Myrath and Orphaned Land, I find myself far more likely to hear a resemblance to Opeth or the bands of Dan Swanö. There is a distinct Scandinavian feel to this so-called “Oriental Metal” band. The addition of hurdy-gurdy on one track only augments that Nordic vibe, reminiscent of the nyckelharpa that occasionally makes an appearance in Scandinavian metal. But ultimately it is a unique sound that invites the listener to make imaginative leaps, and immerse themselves in the world Riverwood have created (or borrowed?).

While there are occasional growls, as much as I might be reminded of bands such as Opeth, and hear the influence of progressive death metal in Riverwood’s sound, they are possibly better described as symphonic metal. I’m wary to do that, though, as I’ve never been much of a fan of symphonic metal as it tends to be so damn cheesy. Riverwood, to my ears, somehow avoid that cheese – which is actually pretty surprising, and a little impressive, given that they don’t just play symphonic metal (cheesy), but symphonic metal apparently based on a video game (super cheesy). A lot of credit for this, I guess, needs to go to Mahmoud Mohamed Nader, as the principal songwriter, lead vocalist, and guitarist of the group. Nader has a terrific voice, too, so I’m glad he doesn’t go for growls too often. I have no list of credits, so can’t say exactly what instruments are being played (or by whom), but there appear to be a multitude of traditional stringed and wind instruments being played. It sounds like a duduk (or similar) on a couple of the songs, but knowing that Gabriel Marin made his fretless guitar sound like a duduk on his 2021 Ruminate album, it may well be that the band have merely emulated these ancient instruments on more modern ones. Either way, they sound great.

Another aspect of the album I find quite satisfying is that, as a double album it is almost literally so, as it is effectively a pair of shorter albums, Shadows and Flames, rather than Shadows and Flames, and each has their own subtly distinct sound and feel. If the entire plot of the album(s) is based on Skyrim, it is possible others may be better placed to explain the concept. But for me, in all my ignorance, it is the story of the fall of a once dominant and might civilisation and empire. I can’t say for sure that that is the case, but from the lyrics, and the way the music plays out, that is what I hear. And if this is the case, Shadows is the last, well, shadows of this once great civilisation on the eve of its demise, while Flames is that demise. The end is given the analogy of a storm, so Shadows ends with Queen of the Dark, and Flames begins with Babylon. Does this mean that Babylon is the civilisation that falls? Were it not for the Skyrim references, I might be inclined to think so. Does it matter? Not really. The album, and concept, works regardless of whether there it is based on the history of our world, or that of Skyrim. That Babylon is one of several instrumental interludes on the album perhaps indicates that it is an allusion rather than anything else.

I find these instrumental tracks not only enjoyable in their own right, but extremely effective in both adding a cinematic atmosphere that would be fitting in any video game or fantasy film, and giving a break between some of the lengthy songs. Speaking of breaks, despite the length of Shadows and Flames it is never wearing or boring. The album is constructed in such a way that my interest is always held, and time seems to fly by. But even for those who don’t want to listen to so much all at once, listening to either Shadows or Flames is just as satisfying, and complete in itself. Looked upon this way, Shadows and Flames is amazingly good value, with two albums for the price of one. (And there are plenty of bands who would have released this music as two separate albums.) I’m still enjoying Shadows and Flames too much at the moment to move on, but when I do, I’ll definitely be checking out Riverwood’s debut, and hoping to live happily ever after.