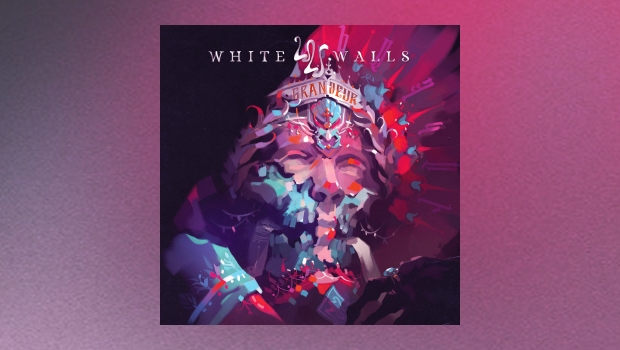 Romanian band White Walls make me think of Ihlo. Not because they sound alike, because they don’t, but rather because, though I’ve not actually read any reviews for their third and latest album, Grandeur, I can well imagine people almost competing to say who the band sounds like. However, I’m willing to bet that, like Ihlo, there will be very little agreement as to who the band sound like. Like Ihlo, there will probably be some similarities between the bands offered up for comparison, but each of them will have their own original sound. And like Ihlo, White Walls very much have their own sound, too. There’s not a single song on Grandeur that I think sounds much like any one other band. But, just to be obtuse, if you’re a fan of Leprous, Nevermore, Gojira or Ihlo, you might want to check out White Walls. Do I think they really have (m)any similarities to any of those disparate sounding bands? Well, no. At least, not in sound. In talent, however…

White Walls are one of those bands I’ve come across this year that I feel genuinely upset that I wasn’t aware of otherwise. The sort of band I feel are criminally unknown – in this case, probably due to their geographic location more than anything else, as they are as talented and enjoyable to listen to as any of the bands they might be compared with. Not only is Romania probably furthest from the minds of many music listeners, when the country does come up it’s for the fierce blackened folk of celebrated bands such as Negura Bunget. Perhaps that’s why the band have chosen such a vibrant colour scheme for their cover art? There’s certainly no mistaking Grandeur for black metal. They are, however, surprisingly heavy. Well, perhaps not so surprising if you’re familiar with the band, or have paid any attention to the promotional material. But I always like to dive into new music with no preconceptions, and as little knowledge as possible of what I’m about to hear.

The album begins with what is essentially one track. It is listed as two on the Bandcamp page, but came as one track in the copy I received for review, which makes more sense to me as the two are irrevocably paired in my mind. And it is this pairing that left me unprepared for what was to come, as the short first part (False Beliefs) is hard to be described with any adjectives not synonymous with beauty and prettiness. Virgil Eugen Brudaru‘s vocals are the focal point, sounding somewhere between Jon Anderson, Damien Wilson and Daniel Tompkins in their power and emotional impact. The last of those is the closest indication of what I thought the song might evolve into – something somewhere between the worlds of TesseracT and White Moth Black Butterfly. Oh holy shit, no. Eye For An I comes in and bludgeons any such thoughts into a bloodied and beaten mess. As the last delicate notes of False Beliefs fade, deep distortion kicks in, followed by a huge increase in pace and some brutally delivered harsh vocals.

What Eye For An I does well, is provide a grounding for what the rest of the album entails – a constantly moving conglomeration of harsh and heavy, and clean and melodic. This is no Opeth-style melodic death metal, with clean breaks between the heavy and the melodic. There’s no translations as such, as it’s all so greatly and fluidly integrated. There’s a catchy mix of complex and chuggy riffs (Alexandru Eduard Dascălu), underscored by a rhythm section (Șerban-Ionuț Georgescu on bass, and Theodor-Ștefan Scrioșteanu on drums) that is insanely groovy, with bursts of breathtaking syncopation. Perhaps key to it all is the vocals of Virgil Eugen Brudaru, whose strong and powerful vocals perfectly bridge the contrasting nature of the free flowing music. Both his clean and harsh vocals’ are amazing (and I say that as someone who has never been a fan of harsh vocals), and really emphasises the dynamic between the two,

I love the bass heavy intro to Home is on the Other Side, which is a far heavier proposition than what’s come before. I love the way I was both jolted by the heaviness of Eye For An I, and simultaneously eased into the heavier Home is on the Other Side, and this is I think due to two things: some very well thought out sequencing from the band, and the (as usual) impeccable work of Forrester Savell, who mixed and mastered the album. Even when the clean vocals come in, and the sound becomes more expansive, the pulsating bass carries on pummelling. Holy Worse is notable for making far more of a distinction between harsh and clean, essentially having aggressive verses and a melodic chorus. It sounds tailor-made to be a single, and having a more conventional structure than much of the album, would likely work well as such. Then again, I’m glad it hasn’t been released, for as much as I love it, it’s perhaps the least original and least representative of what the band sounds like.

Velvet, which follows, is for me a far better representation of what White Walls do so well, wonderfully ebbing and flowing between their two musical poles, and mixing like the oceans between them. It also has some of the most impressive moments from all members of the band. Definitely a favourite of mine, as smooth as the soft touch of velvet, and as stinging as having a strap of that same velvet tan your hide. Speaking in Tongues is the shortest track on the album, after False Beliefs, but should definitely not be discounted on account of it’s length. It packs as much into its shorter length as the longer tracks do, and because of this it is another favourite. (Which is rare for me, as I almost always favour longer tracks.

Then we come to perhaps the most surprising track of the album, not so much because of how it sounds, but because it was chosen as the lead single – and features only clean vocals! If I were surprised by the harsh vocals after hearing False Beliefs, but realistically had no idea what to expect, imagine how someone who heard this song might feel upon listening to the album! That’s not to say it doesn’t play with the same dynamics, as it certainly does, with plenty of aggressive and heavy passages playing off against the more melodic. And it’s undeniably an impressive and enjoyable song. I really like it, but it does feel a bit out of place, and perhaps might have been best as a stand-alone single. I feel I’m betraying myself somewhat, as not being a fan of harsh vocals, I find myself strangely missing them here!

It almost seems that Locked-In Syndrome is easing us back into the harsh element of the band, as, despite the heavier passages, it feels a quite serene and relatively peaceful endeavour. I love the breakdown towards the end, where the band uses empty space incredibly effectively. It’s the second time on the album they’ve done this, and I’m pleased they don’t overuse the trick, or it would not be so impactful. Speaking of impactful, I have to mention the bass again, as he excels on Month’s End. Not that I think the band sounds like them at all, but I’m reminded of Tool in a way, because while I would never say that Adam Jones is the least important member of that band, his guitar work is often textural, with Justin Chancellor providing, for me, much of the scaffolding. The same can be said, again in my opinion only, for riffs Alexandru Eduard Dascălu and Șerban-Ionuț Georgescu. Apart from the awesome bass, this song also has the biggest ear-worm on the album.

Wary of how long this review has become, I’ll skip The Descent, which is definitely not something I’d recommend you do, and head straight for The Slaughter (Marche Funèbre), as it’s titled on my copy (though just as Marche Funèbre on Bandcamp), which is surely one of the most impressive, if not the most impressive, track on the album. Do I dare mention the bass again? I have to, as the introduction to this song is amazing! The whole song is amazing, though, from beginning to end, and the final moments of this lengthy track are sublime. Grandeur, indeed. The album is atmospheric, balanced and expansive, and mixed to perfection. The music is equally technical and intricate, and subtle and melodic. It deserves to be featured on the end of year lists of many, but I fear it is probably known by too few. Do yourself a favour, and make yourself one of those few.