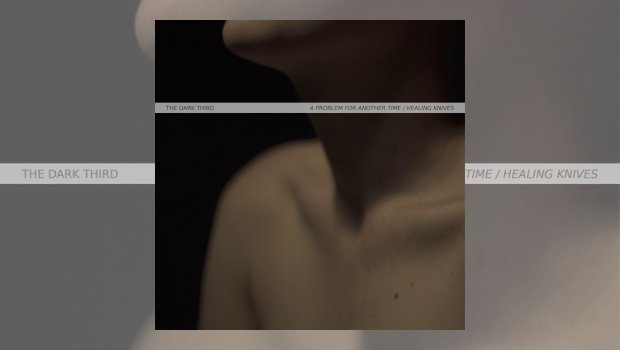 The Dark Third – A Problem for Another Time / Healing Knives

This year has been a strange one for music. Release dates have been moved back, and back some more. Gigs to celebrate those releases have happened months afterwards, or not at all. And there has been an extraordinary amount of older material released or reworked. While a lot of people are aware that bands and artists are often not able to play live, I think they expect them to spend the time when not gigging recording new material. What this doesn’t take into account is that if there is no money coming in from performing, there is no money for recording either. (The trickle down means that studios and producers, etc. are also suffering, but their plight is less visible.) It’s no wonder, then, that musicians are digging into their back catalogue.

One such release is the recent single from The Dark Third – billed as a double A-side companion to their album, Even As the Light Grows. That album came out in 2018, so I guess were it not for the strange times we find ourselves in, we might not have heard these two songs at all – and that would be a great shame, as they are both interesting and enjoyable. There is still promise of new The Dark Third material, but in the meantime these two unexpected songs more than suffice.

With a name like The Dark Third, the first thing to come to mind for many will be Pure Reason Revolution, and although there is some of that modern prog sound in the music of The Dark Third, they are far from the first comparisons I would make. Rather, I am reminded more of bands such as Anathema or Alcest, or fellow Kiwis Mice on Stilts. I also find The Dark Third’s sound quite reminiscent of Sunny Day Real Estate, and also that band’s brief reign as The Fire Theft. On their Bandcamp page, The Dark Third recommends Mice on Stilts and Astronoid, and describes both as being big inspirations for their music. I’ve not actually heard any Astronoid, so I may have to rectify that, but obviously I agree with Mice on Stilts. The band’s other recommendation is Kayo Dot, and though I’d not considered that, and though they are not described as being an inspiration, I can definitely hear some of that collective in The Dark Third, too.

I have always thought that the artwork for Even As the Light Grows is a great depiction of the band’s sound. It’s immense, jagged and icy, and has many peaks. The Dark Third excel in atmospheric soundscapes, often full of aggression, and with rich crescendos. As for immense, the two longest tracks on the album (both over ten minutes) certainly fit that bill. Despite coming from the North Island of New Zealand, the cover art evokes to me the Southern Alps of the South Island, the snowy peaks of which featured memorably in the Lord of the Rings films. That epic feel fits much of The Dark Third’s music – even in their shorter pieces.

But let’s not dwell on the past, so much as the new songs (which actually come from that same past). The first track, A Problem for Another Time, begins with some absolutely gorgeous guitar, and a nifty bass undertone. Thea Doyle’s drums, as ever, are a delight. I loved her drums on Even As the Light Grows, and I love them here, too. I get the impression that The Dark Third is whoever Daniel Hay happens to have with him at any one time, but I do hope that whatever comes next from the band does include Thea. This song is perhaps the most emo (in the original Sunny Day Real Estate vein, rather than what that term has come to mean in more recent years) I have heard from The Dark Third. It’s an absolute blast.

At almost twice the length of A Problem for Another Time, Healing Knives has plenty of time to impress, and that it does. The second half is infinitely better than the first, and it just blows me away every time it hits. And it hits with a lot of force! Initially I thought I preferred Problem to Knives. It is certainly more immediate, and more immediately appealing. But Knives definitely has a way of sinking into the skin, and cuts deep. It is now easily my favourite of the two. Just, Wow! The saxophone and violin, performed by Alika Wells and Grace McKenzie, provided some delightful accents to the main collective on Even As the Light Grows, which I thought I might miss on this year’s release, but I can safely say my worries were unfounded. There’s more than enough going on with just the four musicians on these two tracks to need further ornamentation.

The two songs were written around the time of the album, but recorded afterward. I think I can see why they were not recorded for the album, but that doesn’t mean they are lesser songs. I’m not sure that they would really have fitted within the overall sound of Even As the Light Grows, but they are just as impressive in their own right. It is definitely fitting to call this release a companion piece, then. And, two years on, hopefully these two songs might bring renewed interest in an album that could easily have been overlooked two years ago. In fact, I’m going to go back and listen to it myself now, and I can highly recommend you do so, too! As good as these two songs are, and as great as a companion piece to Even As the Light Grows as this release is, the album in all its glory is hard to beat. Check out the opening epic, The Dreams of Lesser Men, and see if it doesn’t suck you in….