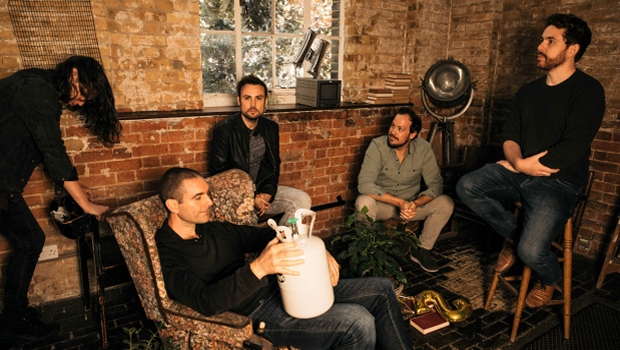 yllwshrk describe themselves as ‘musical misfits who embrace the current blurring of genres and push that to the extreme’. As a fusion of members from both the classical and rock world, they have come together in a fascinating experiment to explore a world of musical styles.

Experimentation is at the heart of the band’s reason for being and they take their name from Frank Zappa’s ground-breaking album The Yellow Shark, full of experiments with acoustic sound manipulation and playing techniques, as musicians from differing backgrounds inspired each other with contrasting ways of approaching music, each with their own particular strength. It was a testament to what can be achieved when musicians of differing backgrounds and training come together to create music and an ideal by which yllwshrk lives.

yllwshrk’s debut album I Am Aladdin is a fitting tribute to Zappa’s legacy, brim full of ideas and experimentation and successfully bringing the classical and rock worlds into a strong and meaningful union.

I Am Aladdin is released on Friday 16th October through EOA Recordings but it has been a long journey to this point. Ian Anderson, whose pre-Covid day job was Principle viola with the orchestra of the Scottish Ballet, found himself alone when the other members of his previous rock band left. It took Ian over a year to find a new line-up and a new name and, eventually, yllwshrk had their first gig in January 2016. But the concept of the new band also brought its own difficulties in getting off the ground.

“People just wandered in off the street. It was very positive and gave us some encouragement. They said how much they enjoyed it and made us feel that there was a future but starting a band is so hard at the best of times,” Ian explained. “It was eye-opening, coming from the classical music world where there is such structure in place. You go through music colleges and then find work, concerts and music societies employ you. So you play a gig, you get paid. In the pop and rock music world you are expected to work for nothing and sometimes to pay to work.

“That made it very difficult to get started. To play yllwshrk gigs meant asking band members to give up other paid work, so in effect giving up your time and paying double to play with yllwshrk. It was really hard to balance and you need a target to work towards. After a while it feels it wasn’t going anywhere, so it was on hold.

“We managed to get funding from Arts Council England, Help Musicians UK and Creative Scotland. Three of us are Scottish, the others are English and we all live in different places although I suppose we are based in London. I’m half based in Glasgow, I have a job with Scottish Ballet and half in Birmingham.

“To take it to the next step we needed this big thing to aim for. Because we had this funding we had the goal of an album, so then it’s not such a big deal to ask people to give up earning money for a night because there is a definite outcome for that. It was only after that happened that we really got going again.”

“We all come from very different backgrounds, so we have tried to incorporate all our different musical experiences. There’s six of us in the band and four are mostly classical musicians. So our background is not in the rock world even though we are massive fans of rock music. We approach it from a quite different background to other rock bands.” 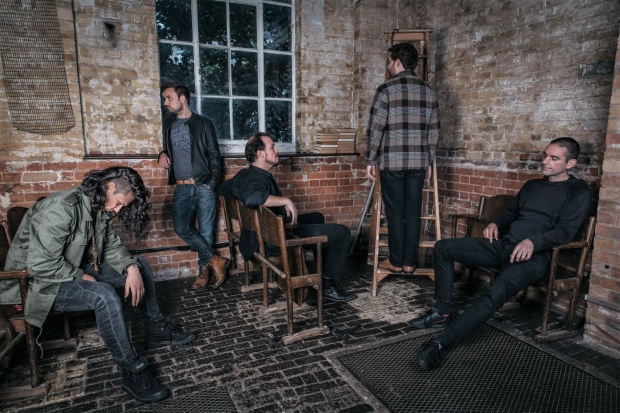 yllwshrk members have appeared on albums such as Radiohead’s A Moon Shaped Pool, Frank Ocean’s Blonde, Actress’ LAGEOS, Thom Yorke’s Anima, and Foals’ Holy Fire as members of the London Contemporary Orchestra. They have performed live with artists such as Little Simz, Goldfrapp, Ry X, Eric Clapton, Deltron 3030, and Elbow, as well as regularly giving classical chamber music recitals across the UK and Europe, and performing and recording with many of the UK’s leading orchestras.

With the funding in place, yllwshrk were able to move forward and record their debut album. The project has also gradually expanded, to span music, dance, film and animation, comprising 29 musicians, eight studio engineers, four dancers, three choreographers, four film-makers, a drag queen, a contortionist, four actors, a visual artist, and a group of very angry Millwall fans on the train from Birmingham to London.

“I’ve been involved in a couple of multi-artform things in the past and music seems to be moving beyond just music,” Ian adds. “We see that with all the big artists like Beyonce, it’s not just music, it’s a whole show. People are becoming used to that, it’s more overwhelming than just the music. We are trying to include not just the music but the visual side and dance. With the album, too, we were always thinking about not just the individual songs but as the whole album.”

“It has, yes,” Ian agrees, “because we have money with which to invite people, that we respected and loved their music. As soon as we realised we could do that and we had money to pay them, it was like a kid in a sweet shop! ‘Who can we invite to contribute to the album?’ It’s kept growing and growing and it was such a pleasure to work with all these amazing musicians. It was really inspiring and helped us as a band. We’ve no idea how we’re going to perform it live but it’s going to be a very exciting journey!

“We were trying to explore lots of different styles throughout the album but trying to keep it as a homogeneous whole can be quite difficult. We’ve been working with electronic composers such as Linda Buckley. Hannah Read and the Maxwell Quartet are amazing, so working with different people for each song automatically brings a different approach and sound. 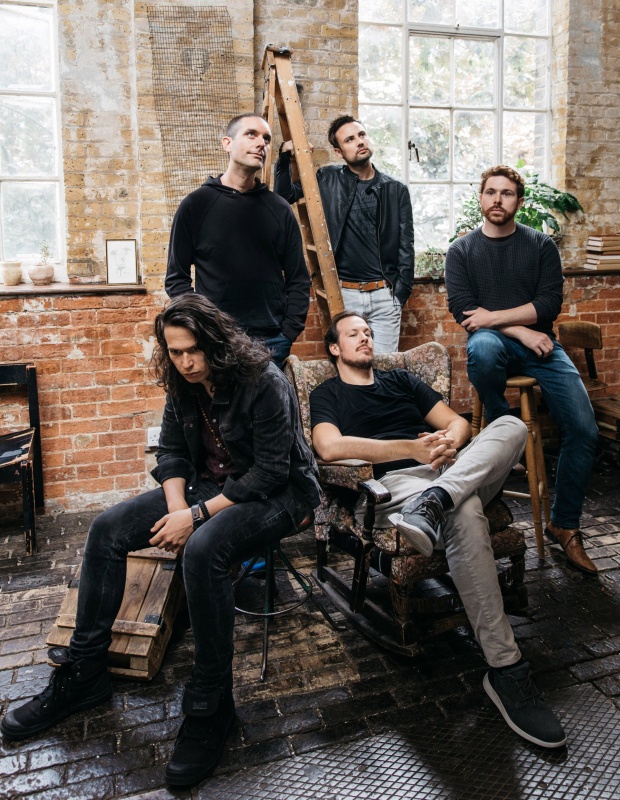 “There’s even some disco in there! Some may think it’s a bit random but we’ve tried to make it hold together and we think it does but that’s for other people to judge.”

The balancing of musical genres from drastically different philosophies and traditions is reflected in the album’s title: I Am Aladdin refers to BlackRock Inc.’s Aladdin programme, which appears in Adam Curtis’ darkly compelling film HyperNormalisation as an example of how modern technocrats attempt to manage the chaos and complications of the real world. This unease with much of the modern world is explored throughout I Am Aladdin, the tone and subject of the songs often taking inspiration from Charlie Brooker’s Black Mirror or Frankie Boyle’s old Guardian columns.

Opening track Smudge reflects the anxiety and isolation behind our carefully constructed social media personas, frozen online forever as illustrated with a powerful video which, in these Covid times, we can all relate to. “The director Max Lincoln wanted to, especially in these lockdown times, take that idea and have windows into six different people’s lives, exploring isolation and how people are dealing with being locked up and their feelings.”

The pulsing beat was created by passing an activated tuning fork quickly across a microphone. For the sustained bass lines in the song, the cellos of the London Contemporary Orchestra were asked to loosen and detune their bottom strings by roughly the interval of a 5th (an idea ‘borrowed’ from Jonny Greenwood’s previous work with the LCO). The resulting sound is more daemonic, darker, less focussed, with the loose strings occasionally rattling against the fingerboard in the louder moments, and generally more like a driving synth bassline than the standard string sound.

This dark orchestration is well complemented by Sam West’s soulful and restrained vocal and the track moves seamlessly into And Let Them Glow where he is joined by Hannah Read. “This song is about my great aunt, the closest person I had to a grandparent,” says Ian, “and my experience of watching her slowly fade to a pale shadow of her former self due to Alzheimer’s disease. Once so vibrant and loving, she gradually became miserable, confused and paranoid, hallucinating due to the cocktail of drugs she was given to stay alive. Is this kindness? Is this what we really want for our loved ones? Is that what I would want for myself?”

Pyramids and Puki are driven by Feargus Brennan’s drumming and Matt Isaac’s guitar while the London Contemporary Orchestra joined yllwshrk for Arsenik. “Knowing the LCO so well I knew they would be perfect for the album. Their distinctively dark, unsettling sounds involve many unusual playing techniques that I knew would match and enhance our music. However it’s also always fun to shock people, so bringing in an entire twisted disco string score for them to play on Arsenik was fun. They’re more known for their unsettling Jed Kurzel film scores or their fantastically dark Spitfire texture library, so it was fun to watch the session morph into Saturday Night Fever!

“We wanted the album to have the depth of sound that comes through the use of electronics and post-production, but we wanted as much of the record as possible to be derived from live sounds, to give the album as ‘human’ a feel as possible, even in its strangest moments. We wanted to blur the lines between the analogue and the digital.”

This desire to experiment is well illustrated on the closing track Skin. The band all gathered around an open grand piano, using hand-held fans to sound the piano strings. This creates a series of mechanical sustained chords which flicker with energy. These are then sampled and used as the basis of the track.

Although he comes from a non-musical family, Ian is grateful for the support they gave to him, his brother and sister. “They really encouraged us to play music when we were young. They never thought any of us would become musicians and all three of us are professional musicians. They just gave us so many opportunities.

“I grew up playing viola and piano and guitar. I played with the National Youth Orchestra of Scotland, that was my first experience of what it could be like to be a professional musician, playing in big orchestras, it was just such an incredible experience.

“At work I play classical music but I’ve always loved rock music and listen to rock music at home. Throughout all my life these influences have been equal and on yllwshrk they are definitely from both.” 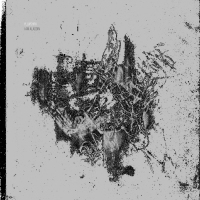