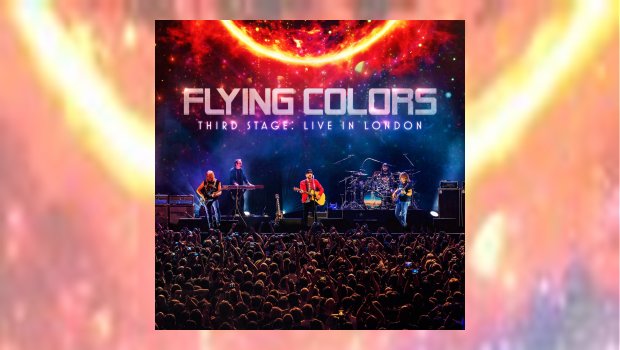 There’s something which sets Flying Colors apart from the other bands in which the Neal Morse and Mike Portnoy axis feature. Whilst both the Neal Morse Band and Transatlantic are undeniably prog, featuring as they do long complex songs or mammoth conceptual creations, Flying Colors is an altogether different beast. They positively excel in crafting accessible, almost poppy, songs which linger long in the memory, and their proggy moments are restrained and tasteful. To my mind, there is one main reason this band works so well, and that is down to the masterstroke of appointing the relatively unknown Casey McPherson as the front man. His voice instantly differentiates Flying Colors from any other project Morse and Portnoy have ever been involved in, and has lead to a completely different style to their sound.

This recording, from London last December, proves the point, and is an excellent summation of what Flying Colors are all about, and the star of the show is Casey McPherson. That’s not to downplay the pedigree or contributions of the other players, all of whom are well known and play at the height of their powers here, but Casey is the man, commanding the Shepherd’s Bush Empire stage with an amiable authority and relaxed confidence which might not have been predicted when he first appeared on their debut release in 2012. His voice is warm, world-worn and angelic all at the same time, and his performance in this show is outstanding.

Having said that, we start with Blue Ocean, which showcases the rest of the band in a relaxed jazzy piece from the debut album, with bubbly bass, crisp driving drums, and Steve Morse sounding very like Jeff Beck circa Blow by Blow. Clearly there is so much more to Steve than his role in Deep Purple. It’s a great toe-tapping piece to ease the band into their stride. Over the course of the next couple of songs, it becomes evident that the band are on top form and very much firing on all cylinders. This was indeed a special night, and you get the impression that the band sense it too. As you would expect for a band of this calibre, the quality of the recording and filming is assured, and the set list is finely balanced, slightly weighted towards the most recent third studio album, but countered by a good selection of classics from the first two albums. Most people’s favourites are present and correct, and given new gloss by a band smouldering beautifully, often igniting in fiery excitement. The atmosphere is captured well as I can attest having been present on the night, and the Shepherd’s Bush Empire is rocking and singing along from the second song, A Place In Your World. We then move on to the third album for the next two, The Loss Inside and More. The quality of the songs is a testament to the easy chemistry in this group; they clearly enjoy playing together, and the happy atmosphere is infectious.

Having claimed that Casey is the star, and he really is, I have to say that Steve Morse is also absolutely key to the appeal of Flying Colors. His solos are tasteful, never excessively long, and his playing style is so versatile that in any mood he supplies the perfect accompaniment. I understand that he suffers badly from arthritis in his hands, a disaster for a guitarist, but you’d never know it on this showing. Neal Morse and Mike Portnoy tend to play much more supporting roles than one is used to, but of course they still shine, and dazzle when required. As for Dave LaRue, his funky soulful bass is exactly right. The way they all mesh together is extremely satisfying, and as the set progresses, they go from strength to strength.

There are too many highlights to mention them all, but Peaceful Harbor is the consummate ballad, Infinite Fire is about as proggy as they get, and Cosmic Symphony, probably their best song, is sublime. The London crowd lap up every moment, and genuinely love the performance. Encores are demanded, and The Storm and Mask Machine are sing-along stand-outs, sending the audience home sated and happy. If only all gigs were this good.

The package comes in numerous formats, and certainly the audio is near perfect, but the visuals are the cherry on top making this a very desirable release which I have no hesitation in recommending.