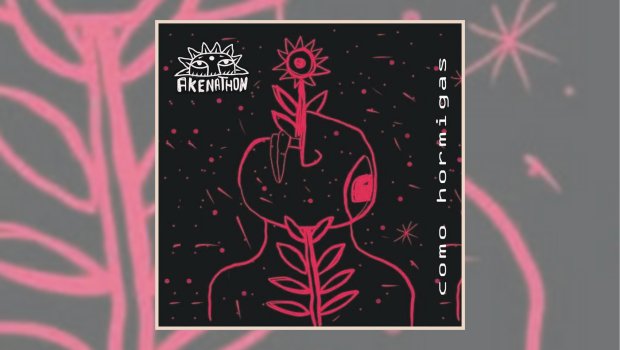 Argentine band Akenathon do not appear to be particularly prolific. Their second album, Como Hormigas, released this year, comes some ten years after their debut. The band has apparently continued throughout, with many line-up changes. The one constant has been founder and guitar player Aníbal Acuaro. The latest line-up has been reduced to a power trio, with the other participants being Pablo Olio on bass and Guillermo Rocca on drums. And one of the first comparisons I involuntarily made when I first listened to Como Hormigas was to another band which has had many line-up changes, and in particular to a time when that band, too, had been reduced to a power trio. Como Hormigas reminds me a lot of King Crimson’s Red, albeit with a far more contemporary sound, and one which has been tangoed and fandangoed across the world.

If not the fandango, then certainly comparisons can be made with the tango. That is, the Argentine tango. When most people think of the tango, they think of the standardised ballroom variant – but Argentine tango is much more varied, and largely improvised. Sure, there may be certain basics that exist, but Argentine tango relies heavily on improvisation and spontaneity. So it seems entirely appropriate to incorporate tango into the blender, along with a good dollop of Argentine folk. Incorporating traditional and folk music into a rock setting is always a dangerous path to follow. Many bands have tried and failed. I remember once playing such an attempt to a friend, who commented it was more cheesy than Eurovision. Akenathon never come close to that, and carry it off with aplomb.

What impresses most is another aspect which draws comparison with both King Crimson’s Red and Argentine tango: the communication between the trio. With so much improvisation going on, there needs to be clear and constant communication, and from the first track it is clear that this is a band that knows each other inside out. Akenathon are tight. Through every twist and turn and tempo change, they lead and follow each other. No matter how complex or challenging the music might be, Akenathon make it sound easy and graceful. Whether it’s a calm passage, or one of raging fury, it’s a pleasure to listen to.

The second song, Irresistible Tic, really hammers home the feel of the South American injection into King Crimson, with some lovely dissonant jazz and distorted tango. Far less melodic than the opening track, but it’s hard not to be swept away by this crazy, swirling tempest. The following Punta del Diablo sounds as if it is the antithesis to Irresistible Tic, but don’t be fooled by its calm beginnings, as there are plenty more squalls of delectable guitar here. Quite possibly my favourite on the album, in fact. Acuaro is fast becoming one of my new favourite guitarists, and I love the incredible amount of nuance he can draw from his instrument.

Vuelos is the second track to have vocals (the first being the title track which opened the album), and like King Crimson’s Red, I can take them or leave them. I don’t dislike the vocals by any stretch of the imagination, and they work perfectly within the frame of the song – but I could just as happily enjoy a fully instrumental piece. That said, the vocals which end the track are particularly effective. The rhythm section really shines in Vuelos for me, even as Acuaro performs more guitar histrionics wildly and loudly over them. I love that Olio and Rocca are not hidden away in the mix. In fact, throughout the album, every instrument is perfectly placed in the mix. Matías González Acuña has done a great job.

Vanka begins full of melancholy and notes that seem almost a caricature of Russian folk. Upon investigation, the song is inspired by Chekov, so that would make sense. However, the sound soon changes from the Iron Curtain to Iron Maiden. (It’s not the first time on the album that I’ve heard a passage that reminds me of that band, but it’s the most overt.) Throw some Floydian psychedelia into the mix, and you have a quite intriguing track – and the one most different to every other on the album. However, as much as I enjoy this track, and the constant changes within it, it is my least favourite. It loses too much of what makes Akenathon unique and original, and is the only track that seems a little, well, sloppy.

Sopa de Hueso is all that Venka strives to be, but fails. And thank goodness, because it’s the lengthiest track on the album, and it would be a shame if it were another disappointment. It starts with a bang, and continues to impress throughout. Sophisticated and eloquent, it succeeds where Vanka failed (for me), with a great sense of fluidity. This soup has a consistent flow, with no lumps, and plenty of flavour. I love the point, just over halfway through, where it appears the song is coming to a close, before being brought back by some absolutely gorgeous bass work from Olio. This second half of Sopa de Hueso is pretty damn cool, and its languid and laid-back vibe is continued with the following introspective Enigmas. Zumac initially keeps this vibe going, almost Sabbath like, before picking up pace. Even so, it’s a surprisingly gentle end piece to the album, but it works – as almost the whole album does (Vanka being the only misstep for me).

Generally speaking, it is clear that Akenathon is Acuaro’s baby, with his guitar often most prominent, but the rhythm section of Olio and Rocco are always there, and absolutely as important. Together this trio has created an extremely enjoyable album which deserves greater recognition. Although released early this year, I have only recently become acquainted with the band. My advice – add this Akenathon to your playlist. And let’s hope it’s not another ten years before the next album…