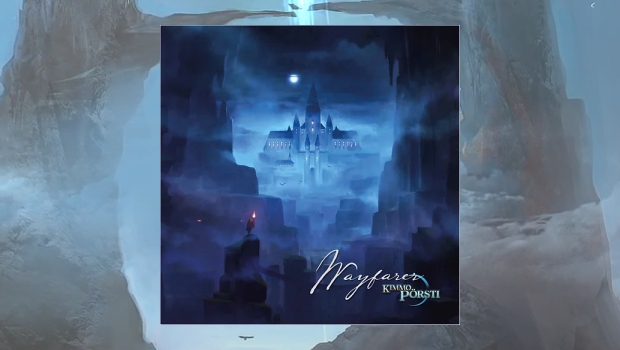 Wayfarer is the second solo album by the Finnish drummer, multi-instrumentalist and producer Kimmo Pörsti, perhaps best known as part of The Samurai of Prog project. So my initial thoughts, glancing through the list of musicians, which also includes bassist Marco Bernard along with a few regulars from the project was – why is this not a TSoP release?

The broader spectrum of music is the answer and Kimmo’s involvement in Paidarion and Mist Season, apparent across Wayfarer. The opening tracks Arrival and Heaven’s Gate, however, are steeped in the traditions of TSoP. The latter, featuring Hitomi Iriyama on violin, reminds us that the third element of the Samurais, Steve Unruh, is missing from this release, this said the haunting Heaven’s Gate retains many of trademarks of TSoP. Heaven’s Gate, written and orchestrated by keyboardist Jose Manuel Medina, himself no stranger to the TSoP camp, opens with reference to his Spanish heritage and a Bolero styled rhythm. Throughout, flute, violin and synths carry the top lines, with Dave Bainbridge adding some fine Latimer-styled guitar.

Rounding off the opening section of the album is the jaunty Connection Lost, full of Celtic folky merriment with Rafael Pacha on all manner of stringed instruments, flute, whistles and with Kimmo Pörsti on percussion.

Up to this point, with perhaps the exception of Connection Lost, could well have constituted a TSoP release, not that that’s a bad thing, just an observation, however the introduction of vocalist Jenny Darren on Morning Mist shifts the emphasis towards Paidarion. Accompanied by lilting flute, Jenny weaves the delicately intoned melody. With the music written and performed by Kimmo, lyrics by Pirkko Pörsti, flute by Hanna Pörsti, the album now takes ownership of the ‘solo’ album title.

Jenny Darren returns for the title track, however – and nothing to do with Jenny’s vocal, I hasten to add – this gentle ballad did very little for me I’m afraid. The same cannot be said of the bluesy rocker Icy Storm. More suited to Jenny Darren’s rockier tones and one of the stand out tracks on Wayfarer, Icy Storm blends folky flute and violin set against Kari Riihimäki melodic guitar.

The flavour of the album changes with the uptempo blast Thunkit, vintage keyboards and synth lines intermingle with harmonised guitar. Nice to see Kimmo cutting loose, and a great solo section courtesy, once again, from Dave Bainbridge. Another great instrumental is the jazzy Witch Watch, which took me back to Kimmo Pörsti’s days with Mist Season, here with some impressive bass, keys and guitar from Jari Riitala, and topping it all off Marek Arnold’s tasteful soprano sax. Finally, mention for the bouncy Heavy Winter, featuring the themic guitar Kari Riihimäki.

As might be expected, references to Kimmo Pörsti’s involvement with The Samurai of Prog, Paidarion and Mist Season are plentiful across Wayfarer and those familiar with those projects will find much to enjoy here. For readers not so familiar, then this album could well serve as a snapshot of what music lies within those band’s albums, along with being an enjoyable listen in its own right.

As with The Samurai of Prog releases, the artwork for Wayfarer is lavish, although Kimmo Pörsti has not called upon Ed Unisky on this occasion, but graphic artist Nele Diel. The impressive artwork throughout not only compliments the music, but adds an extra dimension to the release.