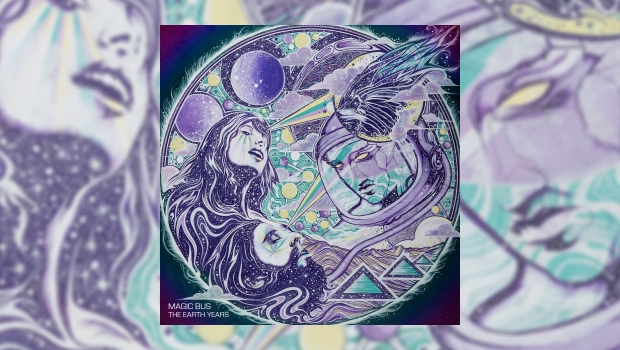 Devon based Cosmic troubadours Magic Bus mark their 10th anniversary with their fourth album The Earth Years, their first visit to our planet since 2017’s Phillip The Egg. The line-up has changed a little which has influenced a change in their musical palette but Magic Bus remain firmly in the territory of the Canterbury and Westcoast sound, tinged with Eastern mysticism. In dark and worrying times Magic Bus bring us the Sun. In the words of the final song We are One:

Their previous album Phillip the Egg saw Magic Bus taking a more ‘Prog’ approach with more expansive passages but The Earth Years finds them a little more succinct and grounded… maybe back to Earth? However, never fear Magic Bus fans… these ‘Merry Pranksters’ still wander joyfully through the sunlit meadows of psychedelia, dripping in psychedelic colours and drenched in whimsical hippie glory.

Easy Om leads us in with a softly pastoral feel with Paul Evans’ distinctive psych wizard vocals weaving a spell before Magic Bus burst out with some great drumming from Connor Spring. The Hippie chant of the chorus is briskly accompanied by a tight band, conveying some of their live energy. It’s short and sweet, and tells us we’re spiritually definitely back on the Bus (called Further or Magic Bus), as described by Tom Wolfe in the Ken Kesey inspired The Electric Kool-Aid Test.

Since their last album Magic Bus have parted ways with Viv Goodwin-Darke, who used to provide flute and backing vocals. It feels as if her absence has meant a loss of her flights of soft melodic flute alongside her voice, which did give a rather gentle timbre to the songs at times. Inca Trail has slight echoes of that approach with a very subtle recorder from Chris D’Addo. On the other hand, Goodwin-Darke’s departure also gives much more space for Terence Waldstadt to express himself more fully with his undoubted guitar mastery. Additionally, ex-Kula Shaker maestro Jay Darlington has more opportunity to expand with his renowned keyboard skills. Inca Trail is an optimistic song underpinned with fluid organ interspersed with short bright bursts of subtle guitar work and embroidered with an ascending dreamy synth solo… But if I’m totally honest I still miss the floaty effect of the flute input at times. For instance, the pastoral idyll of Setting Sun has a gorgeous acoustic guitar, but one cannot help think the synth sounds quite… well, flute-y!

In contrast Barleycorn may just contain some of the most powerful, insistent and discordant music Magic Bus have ever done, opening with aggressive guitar work and furious drumming before it drops almost sinisterly into a droning sitar sound. The tempo gradually picks up again with some flowing bass work from Wihll Mellorz and mellotron sounds from Jay Darlington, and then it all ends rather abruptly. Possibly one of the more peculiar outings from Magic Bus, with a hint of Gong, and all the more interesting for stretching their sound. Similarly, the oddly titled Squirrel is probably the most ambitious song on The Earth Years giving more chance to expand musically. An almost Fairground organ backing from Jay Darlington underlines the more playful nature of the song with Terence Waldstadt complimenting him beautifully on restrained guitars, and the assured rhythm section of Mellorz and Spring rolling along. Paul Evans’ vocals have developed over the years and on this year his mantra like chanting are particularly effective. Halfway through the piece the band lock together in a jazzy rhythm with Waldstadt and Darlington interweaving delightfully and softly – sometimes less is indeed more.

The outstanding New Day is one of the highlights of the album and probably showcases the new line-up at their best. Acoustic guitars and Evans’ whimsical vocals float in on a bright wave of melody. There is such a sense of summery optimism shining out from this song, particularly when Darlington adds tasteful dashes of gorgeous organ work. It is only just over 5 minutes long but they pack so much into this piece with a psychedelic instrumental passage featuring a funky bass and great guitar and organ interplay. As this delightful song reaches it’s conclusion Waldstadt lays down an intuitive and restrained guitar with an oddly echoing finale. Magic Bus are a fine live outfit and this piece seems to capture that essence so well.

Magic Bus’s latest sojourn on this planet fittingly ends with the resplendent and positive We are One. Unashamedly retro and soaked in Hippy optimism this is a piece to bring together listeners as the sun goes down after a beautiful day, and one can imagine this going down well at Magic Bus’s favourite habitat – Festivals.

Magic Bus are not here to amaze us with wonderous technique (although they can certainly play). They do not come to bedazzle us with ground-breaking new sounds (but inspired by previous psychedelic fore-runners they undoubtedly produce beguiling and melodic music). They do not come to lecture or preach to us, but do have a simple message and straightforward approach, expressed skilfully and with real feeling. The lockdown has severely limited us all to our homes physically, but Magic Bus have produced some joyful music for our minds where we can journey spiritually anywhere. It may not change the world, but just for a few a few minutes the world will feel a better place, and isn’t that worth something these days?

At a time when the world has been facing great anxiety and suffering maybe what we do need is music filled with positivity and dare I say it… Love!

So put away your worries, open your mind and get on the Magic Bus for The Earth Years – we have even ‘Further’ to go: 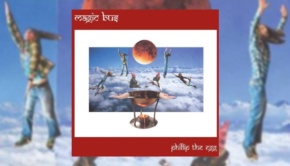