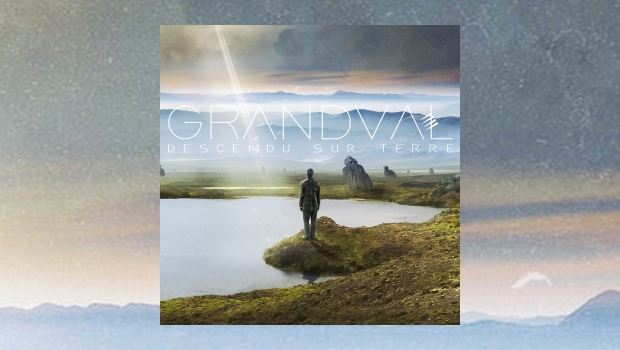 Grandval are a new band to me, but have immediately endeared me with their sound. Grandval may have begun as a solo vehicle for Henri Vaugrand, but for second album, Descendu sur Terre, they sound like a band – even if all but one of the members are credited as guest musicians, making the band now officially a duo, I guess. A very French duo, too, which is fine with me. I am a fan of classic French bands like Ange and Mona Lisa, who quite clearly are influences; and I love Nemo – who are the band Grandval are closest in sound too. Given that Jean-Baptiste Itier is on drums, and Jean Pierre Louveton plays a large number of guitar parts, and provides some vocals, too, this is probably unsurprising. However, while Grandval play a similar style of music to Nemo, it is certainly not the same.

You’d be forgiven for wondering what I’m talking about, though, when the album begins. As, before changing style quite dramatically after a couple of minutes, the opening track is unashamedly Floydian – perhaps too much so, for some to enjoy. I definitely like it, but find it hard not to dwell on how close in sound it is. When the change comes in, it has great impact. From what I can gather, Descendu sur Terre is the second album in a trilogy, concerning the four elements of nature, and the madness of a fifth element (humans). Grandval’s debut album focused on air, and Descendu sur Terre takes on water and earth. I can’t help but think of the two distinct halves of Exondation being musical personifications of these two elements. It’s a beautiful introduction to the album, but things only get better from here on.

I decided to listen to Grandval’s debut, (A Ciel Ouvert…) after enjoying Descendu sur Terre, and the difference between the two albums is astounding. There’s nothing really wrong with the debut, and it’s still very nice to listen to, but Descendu sur Terre blows it out of the water. The two biggest differences to my ears come from Olivier Bonneau and Jean-Baptiste Itier. Bonneau is the only musician other than Vaugrand not credited as a guest, but I hope that Itier joins the ranks officially, too. Vaugrand is a multi-instrumentalist, but it’s his bass interplay with Itier that really works for my ears. Whether playing right or loose, the rhythm section is amazing on this album. And I love Itier’s drumming. If I didn’t already, I definitely would within the opening moments of Un Nouveau Destin. Itier’s drumming definitely puts Descendu sur Terre on a new level, compared with the debut, and without a doubt is able to capture the madness of the human element. The dynamism Itier brings to Grandval cannot be denied.

And Bonneau? Well, it’s hard to tell, as he and Vaugrand both play keyboards, but so much of the playing and arrangements on Descendu sur Terre are different enough from A Ciel Ouvert, that I assume a large part of this is down to Bonneau. The keyboards play a huge part in the overall sound of Grandval, and Bonneau appears to be the perfect foil for Vaugrand, upping his game so that the diverse keyboard atmospheres are all quite incredible to hear. Whether psychedelic, fusion, or trip hop, the keyboard playing is on point.

Puissances de l’Infiniti is a short, almost Porcupine Tree sounding, song which doesn’t really have enough time to develop, and seems to falter and fall away before it needs to, but the introduction to following title track is so gorgeous, it doesn’t matter – although again, it’s all too short, as the bombast takes over the calm of the opening. But it’s a thoroughly enjoyable romp, even if it fades out when it still seems to have quite some life in it. But if my sole criticism is that I wish the songs played out longer, that’s hardly a negative. I just feel that there are musical ideas here that deserve to be developed further, and the ending arrives too abruptly. But that could well just be me, and others may have no such problems. (I am aware that in the past I have made such a comment about a song being too short and fading out unnecessarily, to find that I was very much in the minority.)

On a more positive note, I love the percussion and sound effects that usher in Fractal et Systémique. There’s a very watery tone that’s entirely appropriate for the theme of the album. And, wow, again Itier shows just how impressive his drumming is. And his presence in the mix also reminds me to make a comment upon the production of this album. While there is no way you could call the mixing and overall production of debut album, A Ciel Ouvert… poor, there was to me a simplicity and almost DIY nature to it, that is completely absent on Descendu sur Terre.

Following this track is Le Chemin a l’Envers, which was released as a single ahead of the album. The choice of this track as a leading single surprises me, as although it’s quite nice, it is hardly indicative of the more modern sound of the album as a whole. Le Chemin a l’Envers definitely harks back to classic French prog, to the point of almost sounding dated. Perhaps this is intentional, as what little I remember of the French I learnt in high school translates the title as The Way Back. Regardless, I’m not convinced at all that this is anywhere near the best song to promote the album. It’s a quite beautiful ballad, but if it were the first song I heard from Grandval, it wouldn’t have made me want to investigate the band further. It’s probably the least interesting song on the album for me, and although I do like it (don’t get me wrong), it is as part of a whole.

Il Existe une Etoile in its length shows what Grandval can do when given time, room and space. I do wish other tracks (for example, as aforementioned, Puissances de l’Infiniti and the title track) had been afforded this luxury, as when Grandval are able to stretch out, they really shine. I’m not sure if this is my favourite track overall, but it’s right up there if not, and definitely several of my favourite passages of the album occur within this song. I don’t think it’s coincidence that my favourite songs on Descendu sur Terre are the longest.

That said, the following La Muerte est dans la Place is also a definite favourite of mine, and (apart from Puissances) is the shortest track on the album. It’s also unlike anything else on the album – but it’s quite fantastic. Although the track does have an end, the manner in which this occurs, and the way Brûler dans les Flammes de l’Enfers follows immediately, works almost as if the songs segue – and the first time I listened, without paying attention to the track listing, I didn’t realise immediately that I was listening to a new song. Brûler is almost like the inverse of opening track, Expondation, for if it did not return to the opening theme, it is a song of two halves, with the second being decidedly Floydian.

Descendu sur Terre could have ended quite nicely with Brûler dans les Flammes de l’Enfer, providing the album with sonic bookends, that while somewhat cliché are effective and pleasing to the ear. But Grandval have one more trick up their sleeve, and the third longest track of the album is another completely engaging and entertaining epic. There are hints of bands such as Rush and Deep Purple, which I’ve not noticed anywhere else in the album, in final track La Vie, Pourtant, La Vie, as well as some of the most incendiary guitar solos. It’s a quite glorious finale, ending the album with extravagance and panache.

The CD also contains a bonus track, a cover of La Maison de Men-Tää – which is incredibly good, but which does kind of spoil the perfect ending that La Vie gave Descendu sur Terre. It’s a double edged sword, I guess, as I’d have hated to not have this track, because it’s very good – but at the same time it’s presence here just feels wrong. On my iPod this is solved by keeping the cover, but not as part of the album. It’s nice, though, that the bonus track is part of the physical release, rather than the download – as so often, it is the other way around. And, unlike many bonus tracks, this one is well worth hearing.

If you enjoy the theatrical nature of classic French prog, and want to hear it with a modern and contemporary production and aesthetic, Descendu sur Terre should delight you. There’s a freshness and charm to this album that is extremely pleasing to my ears. If the final part of this trilogy raises the bar even half as much as this album has from the first part, then it will be something incredible. Grandval has set the standard high, but given what I’ve heard here, Vaugrand and Bonneau, and whomever they bring with them for the next stage of Grandval definitely have what it takes.