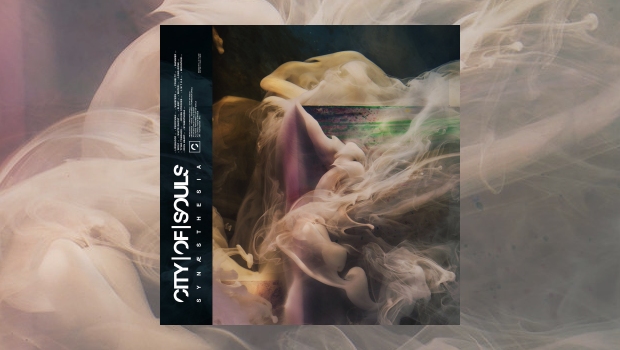 For twenty years now, the month of May has been a celebration in New Zealand of its musical past and present, and the first day of NZ Music Month this year saw the long-awaited release of City of Soul’s debut album. Upon checking my Facebook history, it appears I have “liked” City of Souls since February 2015. The band have drip-fed us singles since then, but finally the whole album is here, and it was definitely worth the wait.

City of Souls are probably not going to be accepted as a prog band by many listeners, but there are definite progressive elements to their music, and the musicians who make up the band are all from bands who are equally not prog, per se, but whose music is often more intricate and complex than other bands that play a similar style. As for those bands, they give no real indication of the music of City of Souls, including extreme metal bands 8 Foot Sativa (for whom Steve Boag and Corey Friedlander have played) and In Dread Response (for whom Steve, Corey and Trajan Schwencke have played), and hardcore acts Cold By Winter (Trajan) and New Way Home (Richie Simpson). If City of Souls bear a resemblance to any of the bands their members have played with, it is Blindspott (Marcus Powell) and Solstate (for whom Daniel Insley has played in its live incarnation).

Reflecting on the length of time it has taken for Synæsthesia to finally arrive, Marcus has said, “City of Souls have hit every single obstacle and block you can imagine. For us, this album is about endurance, passion, and a deep love for music. We have had these songs written and recorded with (producer) Forrester Savell for a long time but for whatever reason, our timelines and plans kept changing. What I love is the solidarity and persistence with which the City of Souls family have pushed through. No matter what happened with the cancelled tours, shows, album deals and record labels, we, as a collective, have stayed strong and loyal. To say we are excited to release this album is an under-statement.” The excitement is not only from the band, but from a devoted fan base.

So what does the music sound like, and why the excitement? Well, there have been six singles released before this year, and another two in recent months, so anyone following the band will know what to expect. But for those new to it, the sound of Synæsthesia is mature and assured, which is hardly surprising given that all the band are seasoned professional musicians with up to 20 years of experience. That doesn’t mean the aggression and angst is entirely missing, so much as it is more subtly layered into the atmospheric soundscapes of the album. Likewise, the vocals may not have the hardcore or extreme gruffness (thankfully for me, as I’m not really a fan of that style), but Richie Sampson’s croon is suitably abrasive when required.

The opening track, Life Blood, seems to bring the beautiful cover art to life, and provides an indication of just how richly and densely layered this album is. The production is wonderful, with every instrument coming through crisp and clear, so everything can be heard and appreciated. Whether or not it is the influence of producer Forrester Savell it can be easy (or lazy) at times to compare City of Soul’s sound with some of the Aussie prog bands he has had involvement with (e.g. The Butterfly Effect and Dead Letter Circus, to name just two); or, to keep it Kiwi, I Am Giant. Realistically, you’re never going to confuse City of Souls with any of these bands, but it gives an indication of the general sound.

The three-pronged guitar attack of Marcus Powell, Trajan Schwencke and Steve Boag provide some awesome harmonies, working together or individually, the riffs and fills sometimes lush, sometimes gritty, sometimes haunting, but always engaging. Coupled with the energetic and driving rhythm section of Daniel Insley (bass) and Corey Friedlander (drums), this is a band full of talent. That rhythm section really shines, too, on the perhaps surprising Joy Division cover LWTUA (surprising only if you’re new to the band, though, as it has been a live favourite for quite some time). I’ve always believed there’s little point in covering a song unless you can do something different with it, and City of Souls have definitely made this their own. I admit I wasn’t initially sure if I liked it, but that was probably down to my familiarity with the original. I love it now.

This is a masterful and triumphant debut that the band can truly be proud of. It has already gained attention outside New Zealand, and if you want to celebrate 20 years of NZ Music Month, this taonga from Aotearoa would be a great place to start. And although celebrating 25 years of NZ Music Month with City of Souls might be nice, too, let’s just hope it’s not another five years before the band follows up Synæsthesia!