For approaching sixty years Graham Gouldman has been a story teller. No Milk Today (for Herman’s Hermits) and Bus Stop (The Hollies) are classic examples of his quintessential English style in the sixties and he had a hand in all three number 1’s for 10cc a decade later: Rubber Bullets, I’m Not In Love and Dreadlock Holiday. Great songs, all, and each paints a vivid picture.

All these years later, Graham has lost none of his touch and his new album, released on 20 March, bears testament to that. Modesty Forbids a collection of fine tales presented in Graham’s most genial and melodic style. What is difficult to comprehend is that this is just the fifth solo album of his long and distinguished career and his first for eight years.

One catalyst for the new release appears to be Graham’s invitation to join former Beatles’ drummer Ringo Starr and his All Starr Band for tours of Europe and the USA, during which the band played three 10cc songs, elevating Graham’s profile yet further. That relationship continues, with Ringo making a very special guest appearance on Modesty Forbids, playing drums on the opening track Standing Next To Me.

“Playing with Ringo Starr and The All Starr Band was absolutely brilliant,” Graham said, “and having Ringo play drums on one of my songs was the icing on the cake. In it, I write about how I came to be asked to join Ringo’s band and about my experience of being on the road with him, alongside Steve Lukather, Colin Hay, Gregg Rolie, Warren Ham and Gregg Bissonette, who also plays drums on three of the album’s tracks.” 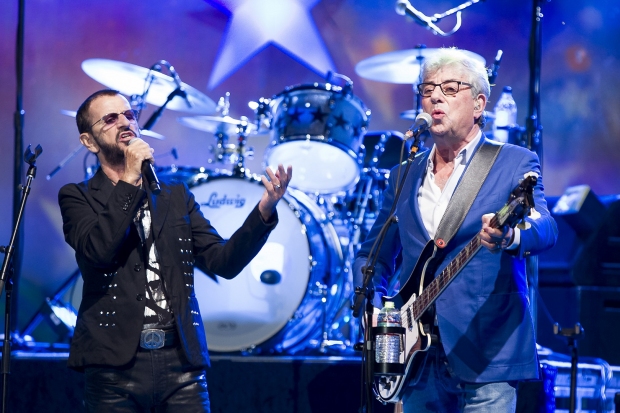 “It was such a thrill for me to have Graham in my All Starr Band in 2018, with his great songs and great bass playing and his very British personality!” Ringo Starr responded, “And look what happens, he goes home and writes a great song and then asks me to play drums on it! It was my honour because the track is fab and I want to congratulate him on such a good album too.”

The album’s eclectic mix of song styles includes swing (something Graham has never tried before), the blues and gospel is something he hopes everybody enjoys as much as he did making the album.

“I can’t begin to tell you what a pleasure it was making Modesty Forbids and to be able to work with so many fine musicians,” Graham enthused. “When listening back to the album I realise that there are two recurring themes. One is about climate change awareness and the other is a call for ‘peace and love’. These two subjects may be clichés, but I don’t care, as long as we take action on the first and practice the second we’ll all be ok.”

Graham went on to give a track-by-track summary of his new album.

Standing Next To Me (written by Graham Gouldman) “A song about being asked to join, and my experiences with, Ringo Starr and his All Starr Band. I would stand next to Ringo front of stage when he wasn’t playing the drums. It was a surreal and wonderful experience to see him Standing Next To Me. It was also brilliant to be on the road with the other members of the All Starr Band, a dream come true.”

That’s Love Right There (Graham Gouldman) “Whenever I go on the road my wife Ariella leaves little notes in my suitcase that I come across when I’m unpacking. She also leaves me little chocolate bars. I was with the band when I found one of these bars and exclaimed That’s Love Right There. I wanted to make an authentic sounding ‘swing’ record so I asked these brilliant players, Jamie Salisbury (piano), Ralph Salmins (drums) and Chris Hill (bass) to play on the record with me.”

All Around The World (Beth Neilson Chapman, Graham Gouldman and Gordon Kennedy) “I asked Beth to send me her take on the song. I couldn’t top her description. At a time of such upheaval and chaos this song reminds me that all is not lost. It doesn’t hide from the truth of the challenges but it brings it all into perspective and it just fills me with such joy! I loved writing this with two of the great songwriters on this planet! ‘It can only get better’ says it all.”

It’s Not You It’s Me (Graham Gouldman) “This song was originally written for the Yardbirds who approached me to write something for a new album they were hoping to record, but it never got made. Don’t ask. I liked the song not least because it uses the old excuse when you want to break up with someone that It’s Not You It’s Me.”

What Time Won’t Heal (Graham Gouldman and Bill Lloyd) “This song was written very quickly like all the good ones do. I had a chord sequence and melody and Bill came up with this great title, he also wrote most of the lyrics. Bill is from Nashville and I think you can hear that influence in the song.”

Different Times ( Graham Gouldman, Anna Krantz and Graeme Pleeth) “I’d written with Anna before and was very happy to work with her again. This song came out of a session we had at Graeme Pleeth’s studio. As well as co-writing the song Graeme wrote a beautiful string arrangement. A song of regret and what might have been.”

Wake Up Dreamer (Graham Gouldman and Iain Hornal) “I already had a lot of the musical ideas for this, which I shared with Iain, who came up with the title and more musical ideas. We have written together before and one of my favourite co-writes with him is Say The Word from his first solo album and a song we perform in our 10cc show. Let’s stop dreaming and wake up to what’s happening to our planet.”

Russian Doll (Graham Gouldman and Graeme Pleeth) “I started this instrumental years ago with the idea that it would make a great movie theme. Maybe it will someday. It was only after I’d overdubbed a mandolin, that sounds like a balalaika, that I came up with the title Russian Doll. I love its dark, melancholic feel.”

Hangin’ By A Thread (Graham Gouldman and Cassa Jackson) “We’d already written one song and at the end of the session I started messing around and came up with the start of this. Cassa joined in with what was to become the title and the chorus of Hangin’ By A Thread.”

Waited All My Life For You (Graham Gouldman and Phil Thornalley) “Phil discovered the demo of this whilst going through some old files and played it to me. I couldn’t understand why we’d never finished it before but I’m so glad we did. It has a lovely Beatles feel to it. I first met Phil in 1986 when he produced the first Wax album. We have remained friends and worked together occasionally ever since.”

New Star (Graham Gouldman and Iain Hornal) “I got the idea for this walking home one day. I heard something being played in the distance on someone’s radio. I couldn’t hear the song very well but I heard the rhythm which I liked. The chords came into my head immediately. I originally wanted to repeat the verse chords for the whole of the song using different melodies but it just didn’t work, so I asked Iain to help me finish it adding new parts. I lost my mum in 2019 and the first line of the song, ‘There’s a new star up in heaven’, refers to her.”

Co-produced by Graham Gouldman and Graeme Pleeth, all of the songs on Modesty Forbids were recorded at The Pleeth Station Studios, except for Waited All My Life For You, which was recorded at Astral Drive, London. Additional recording took place at London’s Hoxa HQ to complete the track That’s Love Right There. The album was mastered by Miles Showell at Abbey Road Studios and the cover artwork was design by Storm Studios, with illustrations by Dan Abbott.

Modesty Forbids is a fine album and the enjoyment improves with every listen. Released on 20 March by Lojinx, the album will be available in CD, Vinyl, Download and Streaming formats. The release coincides with Graham’s 14-date Heart Full of Songs UK tour which begins in Gateshead on 19th March 2020.