Latest Prog News from across the progressive music spectrum & updated throughout December 2019. 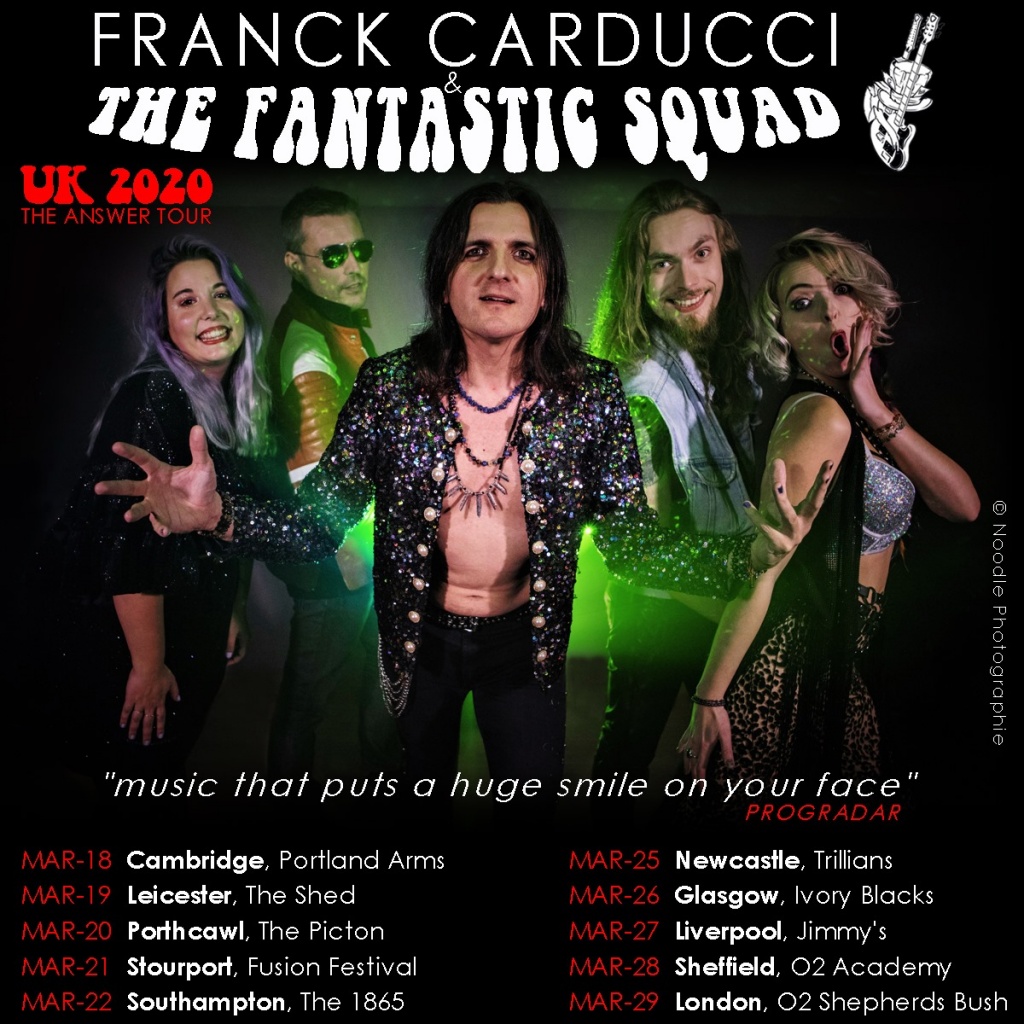 Franck Carducci and The Fantastic Squad have revealed dates for a UK tour in March 2020 in support of new album The Answer. Tour dates include

Edinburgh based drummer, percussionist and multi-instrumentalist Alan Emslie returns with his latest studio album AE 50, scheduled for release this Saturday, 21st December 2019. Taken from the album, and by way of a teaser, is the somewhat dark and foreboding seasonal track, Can We Go On (Coventry Carol)…

The 22 track, double album AE 50 features remixes and new music and will be available from Bandcamp from 21/12/19…

US Progressive metal band Psychotic Waltz return with their original line-up for their 5th studio album and first new music in 23 years. Entitled The God-Shaped Void, the upcoming new album will debut on InsideOutMusic and is set for release on 14th February, 2020.

The first new track taken off The God-Shaped Void is being shared today and is the album’s opening track “Devils And Angels”:

The band comment: “This was the second song we finished writing for the album, right after “The Fallen”. Brian had some chunky riffs to start with, then we all kind of added our own flavor of spices to it, some of which you can really pick up on headphones. It wound up being a lot more epic than we expected!”

The basic tracks for The God-Shaped Void were recorded with engineer Ulrich Wild in the band’s hometown of San Diego, then the rest of the recordings at Studio D in Austria and finally the material was mixed/mastered by Jens Bogren (Opeth, Devin Townsend, Fates Warning) at Fascination Street Studios in Sweden. Artwork (as also presented throughout the lyric-video) was created by longtime visual partner Travis Smith (Katatonia, Riverside, Nevermore).

The album’s bonus-track “Season Of The Swarm” will be available on the limited Mediabook CD (which comes with expanded booklet and an exclusive logo patch), on the vinyl edition as well as on the Digital versions. A standard Jewelcase CD edition is available as well. The vinyl edition of “The God-Shaped Void” comes as 2LP on 180gr. vinyl with gatefold packaging and with the entire album on CD as bonus.

Das Cabinet des Dr.Caligari is the latest musical initiative of Spanish instrumental rock band Toundra. The album works as a soundtrack to the quintessential German silent horror film directed by Robert Wiene that turns exactly 100 years old in 2020. The band have also designed it to function as a dialogue with the listener with the intention of questioning ideas like manipulation, freedom and human nature itself. The album will be released by InsideOut/Century Media on February 28th 2020.

The band comment: “‘Das Cabinet des Dr.Caligari’ is a movie with a very strong visual energy. It’s a film that takes elements of the terror movies to speak about authoritarianism. About how ideas can be controlled and eventually lead a human individual to do the worst things. It was premiered in between-war period, and it represents an advice about the real danger of some ideologies that nowadays are getting a new life across Europe; ideologies based in intolerance. That’s why we like to see this film as historical document that invites to some conscious thinking rather than let ourselves go where intolerants want to take us.”

The artwork has been done by Riki Blanco and it features all the iconic elements of the movie. There will be a tour to present the album live and dates will be announced soon. 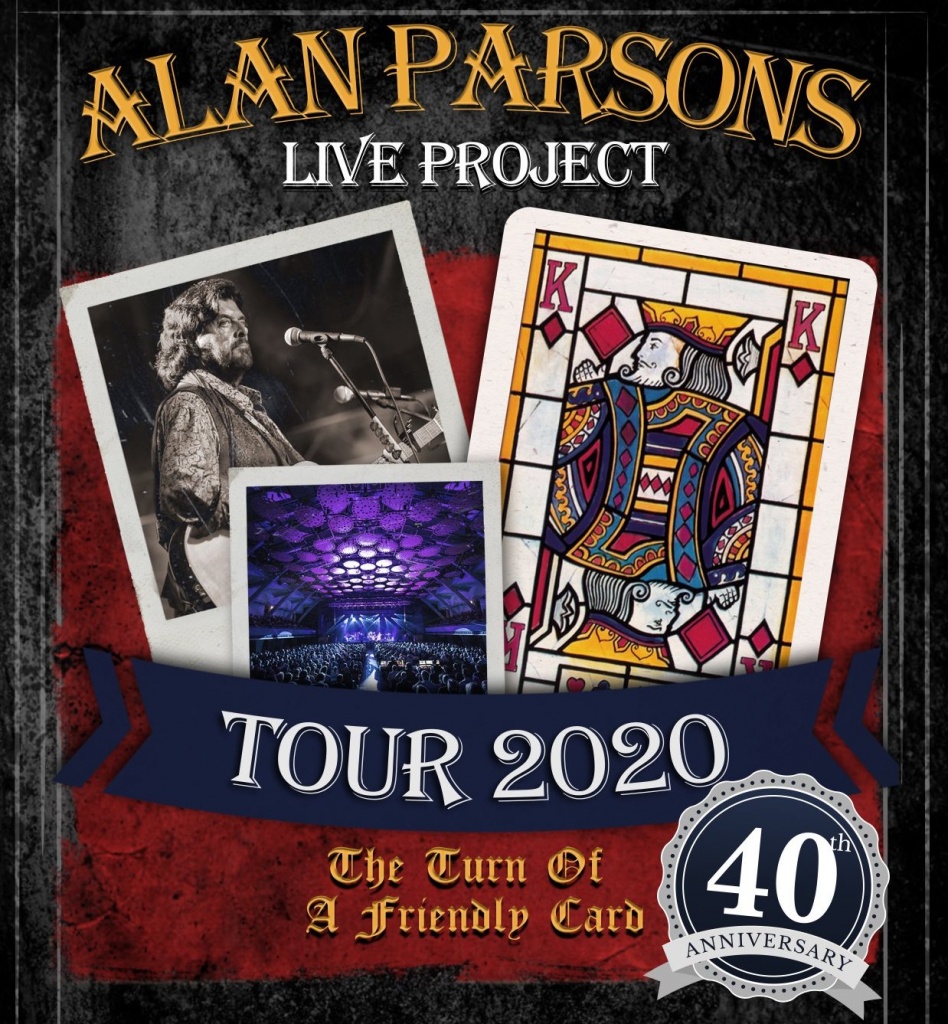 Parsons adds: “We are continuously adding more dates and locations for the 2020 touring schedule, and we will announce as additions are made.”

09/12/2019: The Neal Morse Band Announce The Great Adventour – Live in BRNO 2019 to be Released in March After Signing with InsideOut Music 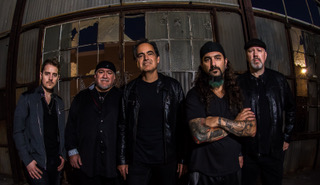 The Neal Morse Band  have announced the release of a new live album – The Great Adventour – Live in BRNO 2019 – for the 6th March 2020. The album marks the band’s return the InsideOutMusic label.

Neal comments: “The band and myself are super excited to be back with our friends at InsideOut! They are great people and I’m sure it will be a fruitful relationship as it always has been.” InsideOutMusic label-head Thomas Waber adds: “There is obviously a lot of history between Neal and InsideOutMusic and we are ready to make more history with one of the most important prog artists of our generation!”

Neal Morse, Mike Portnoy, Randy George, Bill Hubauer & Eric Gillette, released their latest album The Great Adventure at the beginning of 2019 and was the follow-up to their 2016 concept album The Similitude Of A Dream. After the release the band embarked on a European headline tour. The Great Adventour – Live in BRNO 2019 documents these shows, which saw them performing the album in full, and closing with the renowned ‘The Great Medley’ – featuring tracks from across Neal’s solo career and each Neal Morse Band album.

Available as a 2CD + 2Blu-Ray Digipak, the set also features two tour documentaries from both the US & European runs, as well as the official music videos for the singles taken from ‘The Great Adventure’.

As Randy George explains: “After the Similitude tour, expectations were really high, and we had more people coming to these shows than ever before. People were really excited to see it, so we had to make sure that we delivered.”

A Night of Progressive and Contemporary Music sees Wishbone Ash and the Jan Akkerman Band joining forces to perform an evening of music culled from both their back catalogues – from the late 60’s to present day. The dates are in 2021 (not a typo)…

The Jan Akkerman Band will be undertaking a short run of UK dates – TBA. | Wishbone Ash will also be on tour in 2020, again dates TBA.

Keep up to date with these dates and more from across the prog spectrum with the TPA Gig Guide.

Ahead of her short run of UK tour dates in January, Heather Findlay has released a video of Southern Shores taken from the Wild White Horses album.

Heather will be rounding off 2019 at York’s National Centre For Early Music on 20th December.

Keep up to date with these dates and more from across the prog spectrum with the TPA Gig Guide.

Pendragon will release their 11th studio album, Love Over Fear in February 2020 and by way of a taster they have released this teaser clip featuring snippets from Eternal Light, Truth and Lies, Water, Whirlwind and Who Really Are We?…

The band will embark on on a lengthy European tour in support of the album. Kicking of in February with four UK dates, before heading through France, Germany, The Netherlands, Poland, Austria, Italy, Spain, Switzerland, Denmark, Sweden and Norway before heading back to the UK for next year’s Winter’s End Festival. Pendragon have also announced Canadian dates during May 2020… Visit the Pendragon Tour Page for more detailed info.

Arena have announced an October release date for their next studio album, The Theory of Molecular Inheritance – details to follow. To coincide with the album release the band will also embark on a lengthy “25th Anniversary tour” Visit the Arena Tour Page for full details. 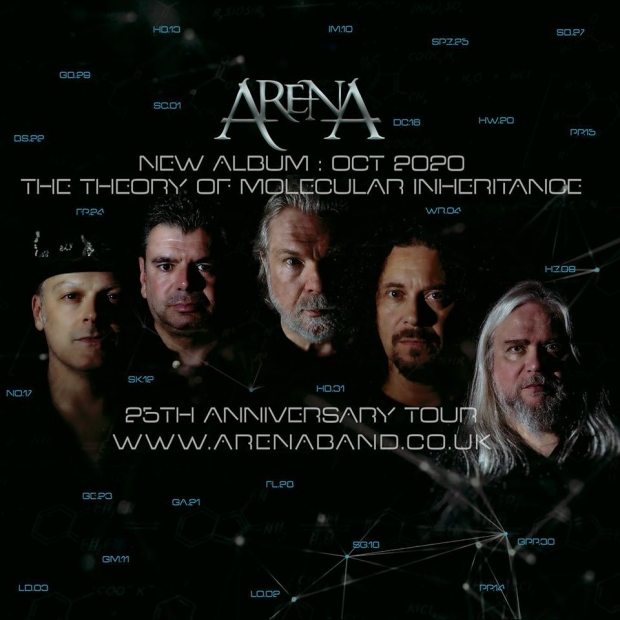 Keep up to date with Arena’s UK dates and more from across the prog spectrum with the TPA Gig Guide.