On a cold Friday night in November, Jadis and Mangrove perform at the Zoetermeer (prog) rock temple. Mangrove is a Dutch prog rock band consisting of four good musicians. The compositions, mostly in the symphonic rock genre, are somewhat lacklustre but played with a lot of zeal and enthusiasm. The gig is also used to perform two new, thus far unreleased songs. I particularly like the interaction between keyboards and guitar. Guitarist/singer Roland van der Horst is an excellent guitarist, playing his little ‘toy guitar’ (a Kiesel if I’m not mistaken), he perfectly demonstrates being the driving force behind the collective. In addition, compliments for new drummer Lex Bekkernens; the Benjamin of the group is a brilliant percussionist and also contributes some vocals. However, the majority of the audience has come to see the main act. 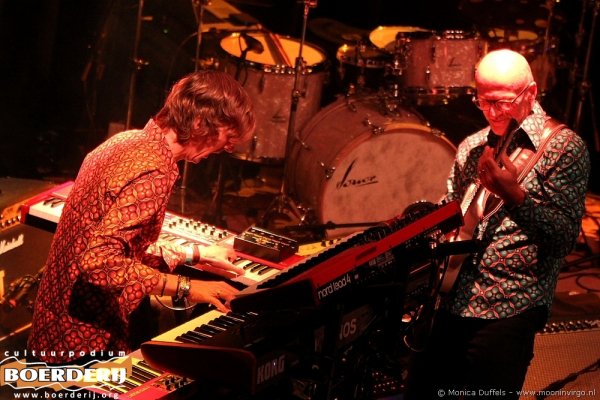 Jadis is a melodic rock band from the south of England, founded in 1986. Once started as a professional band, they frequently supported contemporaries such as IQ and Marillion. Fast forward 33 years and 12 albums and the band is still active, albeit only to a limited extent, acquiring a certain cult status. The nucleus of the band is formed by guitarist/singer Gary Chandler and keyboardist/singer/flautist Martin ‘Widge’ Orford, the melodic guitar playing of the former and the recognisably “old-skool” keyboard playing of the latter determining the sound of the band. Most recent studio album No Fear of Looking Down dates back to 2016, with only a curious compilation following to date. In April 2018 the band visited the Netherlands for the last time, again to the Boerderij.

The show in Zoetermeer is part of a short tour through the Netherlands, Germany and the United Kingdom, with seven gigs for the time being, but in all likelihood more dates will be added. An estimated 250 enthusiastic visitors have come to see Chandler et al play, and they will not be disappointed. 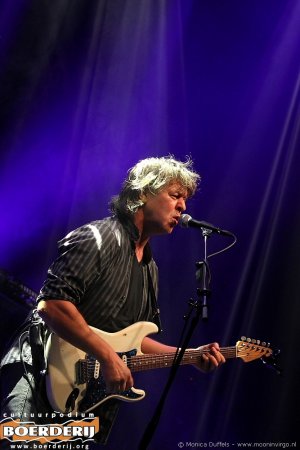 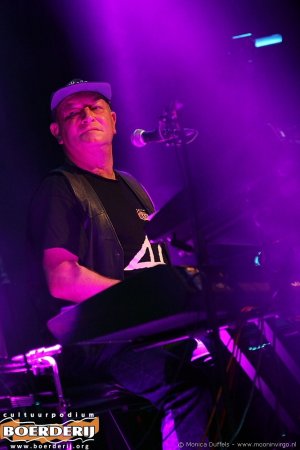 The band kicks off with the rocky Just Let it Happen and the atmosphere is immediately there. Where in the World is announced by Chandler as one of the band’s so-called “near hits”, to the great hilarity of Orford. It is perfectly clear: these two musical friends are looking forward to this show and want to have as much fun on stage as is humanly possible. Successively, Asleep in my Hands, Standing Still and View From Above follow, the latter with its clear IQ influences, while the drum computer plays an important role in A Thousand Staring Eyes. Chandler is the undisputed star of the show, he still plays his old faithful white Fender Strat, as he has been doing for 35 years. His guitar style is somewhat reminiscent of IQ guitarist Mike Holmes, but with a sharper edge. His voice is in particular good shape this evening, the combination of solo guitar/lead vocals still seems to work out well for him.

A highlight in the set is the trio of songs that are played as a duo by Widge and Gaz. Learn by Now, More Now Meets the Eye and, especially, A Life is all you Need get memorable versions that make you yearn for the more progressive rock period of the dynamic duo. Beautiful harmony vocals, brilliant soloing and interaction between friends guarantee magical musical moments. Another piece of flute from Orford on the last track is the icing on the cake, the audience clap ’til they are blue in the face.

Humour is inextricably linked to Jadis’ shows. Jokes are flying round, at high speed, the list of topics seemingly inexhaustible featuring, among others, growing older, Bossche Bollen (special Dutch pastry), syrup waffles, a trip through Kent, Duvel beer, lots and lots of beer and many more things. Chandler at one time lived in our country for six months and his Dutch vocabulary is mainly driven by food, he admits somewhere halfway through the show. He still has that boyish charm and appearance, even more so some three decades later. Perhaps partly because of that, his mistakes and fumbling around with his equipment are forgiven. He is also a hard worker and without a doubt the most sweaty musician within the genre! What’s even more remarkable: his live sound is heavier than ever. The combination with partner in crime Martin Orford produces many beautiful moments: especially the harmony vocals are perfect, even three-part with bass player Andy Marlow. The latter is an excellent and melodic bass player who reminds me a bit of Marillion bassist Pete Trewavas. With this professional backing band, including experienced drummer Stephen Christey, relatively few gigs are booked, unfortunately. 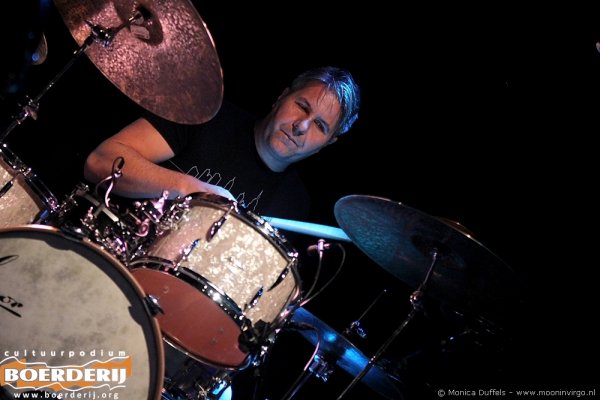 Bassist and drummer rejoin the illustrious duo for Sleepwalk and There is a Light, the latter this time in a rather heavy version. Chandler invites everyone to sing along, the real fans join in. We are treated by an excellent Chandler to one of his signature guitar solos on In Isolation from 1994’s Across the Water. What If I Could Be There and The Great Outside precede No Sacrifice. The stage is appropriately bathed in red light and the crowd is once again invited to sing the lyrics (“when I see red”), a large part of those present gratefully making use of the opportunity. The announcement of G13 can also be counted on for a lot of support from the audience, the old song from the iconic album More Than Meets the Eye from 1992 is the last song of the regular set.

But Jadis wouldn’t be Jadis if there was not to be a big encore, so the foursome soon return to the stage for two final songs. In the Dark is described as a nasty experience in a tunnel somewhere in Northamptonshire, while the popular The Beginning and the End, one of the more proggy songs, is treated by great enthusiasm. This also happens to be the very last track of the set, after just under two hours the party is over, it is now shortly before midnight. Germany is awaiting Jadis, a long journey lies ahead.

[This review first appeared in Dutch on the Progwereld website, all photos by Monica Duffels.]

SETLIST
Just Let it Happen
Where in the World
Asleep in my Hands
Standing Still
View From Above
A Thousand Staring Eyes
Learn by Now
More Than Meets the Eye
A Life is all you need
Sleepwalk
There is a Light
In Isolation
What if I could be there
The Great Outside
No Sacrifice
G13
~ Encore:
In the Dark
The Beginning and the End