Roger Waters, co-founder and songwriter of Pink Floyd and the creative brain behind the band, presents his long-awaited film Us + Them, a spectacular visual production with breathtaking audio, now in the form of an exclusive cinema event.

Us + Them was filmed during four performances at the Ziggo Dome in Amsterdam in June 2018, during the European leg of his Us + Them tour in 2017 and 2018. During the aforementioned tour, Waters performed in front of audiences in excess of two million worldwide. The film contains songs from his legendary Pink Floyd era, with special attention for The Dark Side of the Moon and Animals, and his latest, well-received, solo album, Is This The Life We Really Want? Waters has once again collaborated with Sean Evans, director of the critically acclaimed film Roger Waters: The Wall.

So definitely worth a visit, all the more so since there were only two dates available for an exclusive viewing. For me personally a scoop, due to circumstances I missed out on a similar event two years ago featuring, of all people, former companion David Gilmour. A second chance, so off to the cinema in the heart of my hometown The Hague, Holland, on a rainy Sunday afternoon in October.

And I’ll get straight to the point: I witnessed a downright impressive concert film by the now 76-year-old legend from the U.K.

The show is fairly well known, certainly you might well have read a report on one of Waters’ countless gigs during his worldwide tour. I’ll just single out some of the highlights, for me especially, the Animals section, with Dogs and Pigs (Three Different Ones) and a full Battersea Power Station, including four smoking chimneys and pink pig emerging from the roof. In Pigs, a leading role in a negative sense is reserved for the American president (“Trump is a pig”). The same also applies to Money where other world leaders are also featured. Goosebumps during Déjà Vu and Wish You Were Here.

Waters is accompanied by a true top-notch band featuring, in addition to himself, singer/guitarist Jonathan Wilson and drummer Joey Waronker. Although Wilson does impress, his singing voice is just a tad too sweet for my taste, it lacks a jagged edge. It’s not entirely fair, but you subconsciously compare to the original, who happens to excel at precisely that, with his raw, mature voice.

I have another point of criticism: the images of a super enthusiastic audience were clearly not shot in Amsterdam, but evidently in Brazil. Apparently the audiences in the Netherlands did not react sufficiently excitedly in the opinion of the filmmakers, despite the word of gratitude from Waters after the performance, praising the warmth of the audience. Well, that’s what all artists say at virtually every performance, regardless of location, if they can remember it at all.

Waters is best known for his socially critical lyrics and attitude, this time expressed in short films in which the decades-old music is linked to images of boat refugees and Palestine. An excellent illustration of how valid and timeless the music of Pink Floyd still is. A small comment on all this visual sorcery: the images are sometimes so dominant that the musical aspect is in danger of getting lost: Dave ‘Killer’ Kilminster’s brilliant solo spots, assuming the part of David Gilmour, hardly ever come into the picture however, unfortunate for the true enthusiast.

Furthermore, I have nothing but praise, a feast for both eyes and ears that lasts for more than two hours. The images are really fantastic, you get the feeling that you are standing right in front of the stage, or sometimes even on it. Especially the close-ups of Waters’ are brilliant, the veteran’s passionate grooved face oozes from the screen. The sound is also great, quadraphonic naturally. The venue was not completely sold out, there is room for more than 200 visitors at Room 3 at the Pathé Buitenhof in The Hague, but it must have been close.

It takes some getting used to, the fact that at times you feel the need to applaud or sing along, but nothing of the sort, the audience remains silent. Apparently, just like me, impressed by what is offered on the big screen. The average age is well over sixty with a striking number of ladies – the gentlemen probably deemed this special event to be acceptable to their spouses/partners. What is disturbing is the frequent visits to the toilet, as a result of which people walked by in front of the screen. But ok, we all need to go at times, certainly at this age. Having said so, it is nice to see your favourite band perform from the comfortable plush seats, without having to stand on your feet forever, limping to and fro. So overall a pleasant experience, although I will gladly find myself standing in the crowd once again during one of the upcoming gigs, because, I have to admit, the real atmosphere of a concert is sorely missed.

After the official part, a bonus follows, Fleeting glimpse, a piece of extra footage with images of the preparations and behind the scenes of the circus, which is a performance by Roger Waters. The words during the short documentary are his own. Remarkably the set list is not identical to the concert, in particular the encore is almost completely absent, no Comfortably Numb alas. Instead, we are graced with the aforementioned mini-doc in which fragments of the iconic song can be seen/heard.

All in all an excellent film, one of the better concert recordings of recent years. No expense has been spared, which is clearly noticeable. In recent years I have skipped some of Waters’ live shows, but this definitely gives me a taste for more, and I hope to be back soon, to applaud loudly and sing along at the top of my voice: they won’t have to go to Brazil for shooting footage of the audience next time. 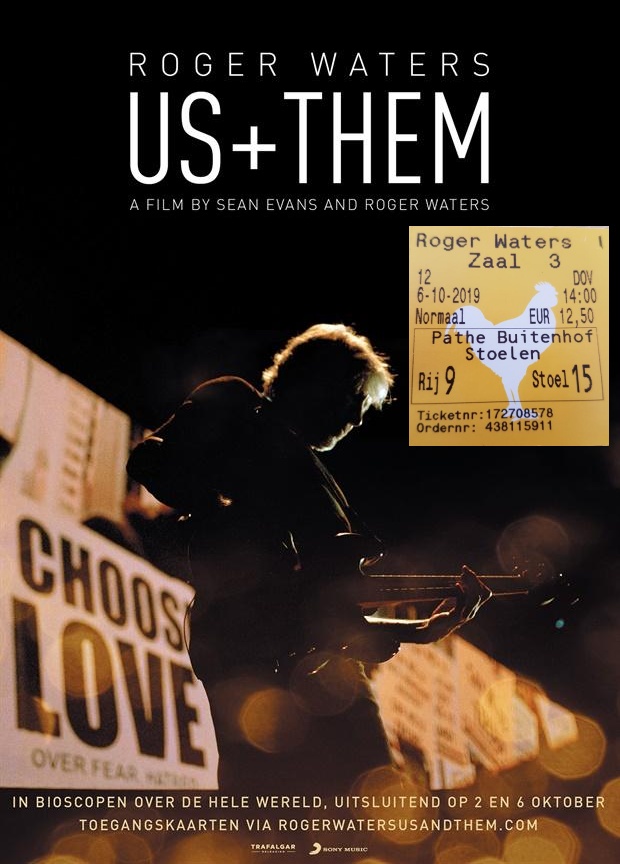