If ever an area was best suited as a prime example of modern London’s cosmopolitan buzz, then Dalston, a part of the London Borough of Hackney, is that area. Teeming with music venues of all stripes, The Vortex Jazz Club is but one, situated on one corner of the cultural hub that is Gillett Square. Surrounded by bars, ethnic eateries, and the urban beat, our venue is to be found above one such establishment that provides a fine line in street food and a plethora of well tasty bottled beers, served in a convivial atmosphere. 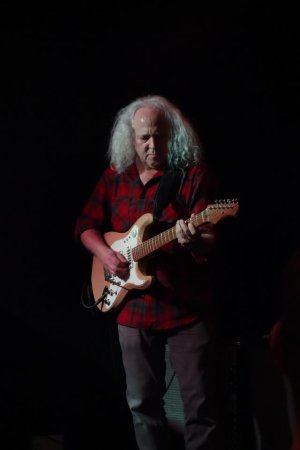 We reach the first floor performance area at around 8:30pm-ish, and after around half an hour the hirsute but diminutive figure of David Torn makes his way through the crowd, who are mostly seated at tables, apart from a small standing area near the bar at the back of a room not much bigger than half a tennis court. For the next half an hour, David treats us to some improvisations courtesy of his customised salmon pink guitar, a plethora of effects pedals and an amplifier interface hidden from my view, the knobs of which were twiddled with a concentrated intent at numerous intervals. Some of these improvs were loud and coruscating, some more gentle and almost melodic, but they were never dull. On his way back past our table near the front at the end of his set, he said “Well, I nearly got it in tune”, revealing an impish humour beneath all this serious shit.

I first came across this unique player around the time of the wonderful Bruford Levin Upper Extremities live album Blue Nights nearly 20 years ago and have dipped into his career ever since. It is good to see that he seems to be fully recovered from some very serious health problems a few years back.

Tonight’s thrilling combination of opposites is completed by Swiss tri-tonal minimalist rockers Sonar, the yang to David Torn’s yin in this particular complementary equation, if you will. I use a mathematical term there, as Sonar encapsulate math rock for me, thus proving that it need not necessarily mean a contest to see which band can play the most arrhythmic and convoluted time signature at the fastest speed possible, just because they can, which sadly is far too often the case. 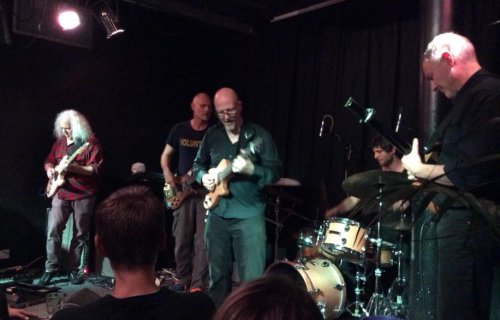 As ever, less is more, as Sonar prove with their first number Tromsø, performed without David, and taken from their very first album A Flaw of Nature, released back in 2012. Setting the hypnotic tone for the evening, it climbs the Escher staircase as if it were born to it. The band comprise the comparatively youthful but nonetheless highly experienced Manuel Pasquinelli on the drums, who also acts as tonight’s MC, a player who uses the spaces in the loose net cast by the others in the band to solo within the song with no little aplomb. Immediately in front and to the right of the drummer stands the imposing figure of Christian Kuntner, a man you would guess was a bass guitarist if he was stood in a shop queue. His way with a time signature and precise (resisting a Swiss cliché, I forge onward… ) sense of timing ensure his thunderous lower register is the glue that holds all this together.

On top of that you have the two guitarists, Bernhard Wagner, and Stephan Thelen, the latter being the chief composer, and de facto band leader, who together and individually weave their geometric sound webs atop the tight-as-a-nut rhythm section. 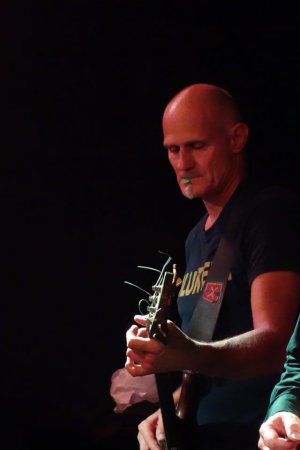 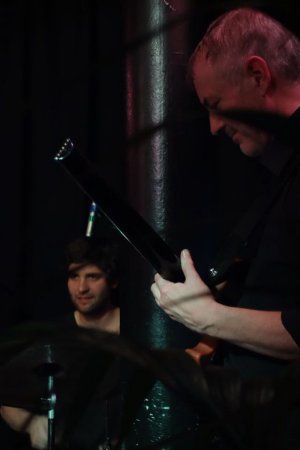 The thrilling current album Vortex is showcased at length, and Manuel does not miss the opportunity to connect the album and venue name in his introductions. Vortex is the first time David Torn has recorded with the band, and you can find out more about the record HERE.

Experiencing Vortex live is an inevitably more organic and visceral experience than on record, and my contention in my album review that the band are on a quest for a state of grace is put on hold in the confines of this packed upstairs room above a café in north east London, as the band and David go on a trip through inner space that renders time without meaning. David howls, buzzes, squeals, clatters, and whirrs through the spacious mesh of Sonar’s considered extrapolations, like a meteor on a cosmic baby walker. The complimentary opposites apparent see David standing to one side, invited into the inner sanctum to play with his toys as he sees fit, but always guided by the rhythmic tramlines straightback to Zürich Hauptbahnhof. The contrast is even apparent in the guitarists’ chosen instruments, with David’s looking like it’s been tinkered about with to some degree, and Bernard’s and Stephan’s both being clean, even clinical (aarrghh, a Swiss cliché!) machines with no headstock.

This is music you can lose yourself in, and looking around the audience I observe several gently nodding heads all lost in their own trips, as it should be. To give you an idea of this live experience, head over to Bandcamp and give the current release Live At Moods a spin. However, if you get a chance to catch Sonar and David Torn live, you should not miss it, as one never knows how long this particular unlikely combination might last. 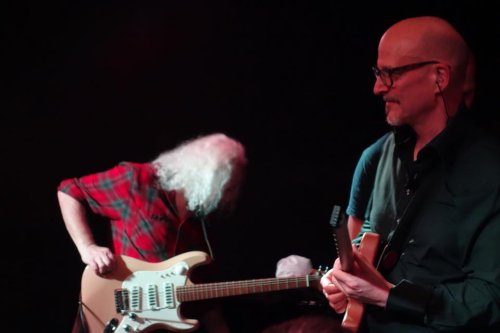 [Pictures courtesy of Michael Bearpark, used with thanks.]