An enthusiastic capacity audience of 600 gather in what has become the London ‘home’ of Pendragon at 229 The Venue to celebrate what the special edition t-shirts triumphantly call ‘The First 40 Years’. Anyone who thinks this remarkable achievement lies in their longevity alone would be gravely mistaken. There are good reasons why they continue to enjoy this impressive level of success and as tonight’s mammoth 3+ hour set amply demonstrates, Pendragon deserve the right to be hailed as one of the U.K.’s most important progressive rock bands.

Nick Barrett in particular is to be warmly commended for an astute and insightful mining of the extensive catalogue at his disposal. The two sets which make up this evening’s show are a deft and intelligent selection of music which is as subtle as it is focused in illuminating the broad diversity of the musical canvass they have created over the decades, the continual adaptation to the influences of the time and the restless urge to push Pendragon ever forwards in terms of the creativity of their music and the directions they are willing to explore. 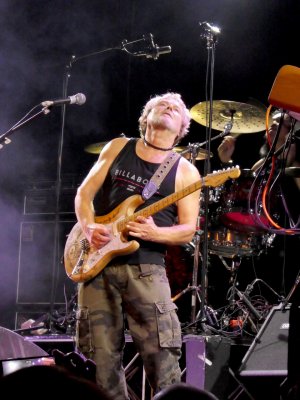 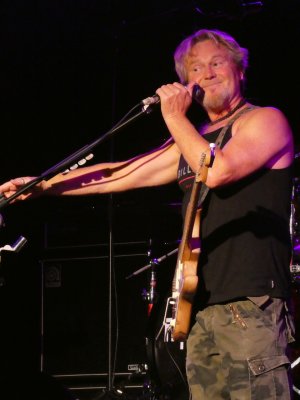 As they take to the stage, fan favourite If I Were The Wind provides an exhilarating gateway to an unusual mixture of the familiar and the expected blended with the surprising and the thrilling. The Voyager is a long established Pendragon ‘classic’ and we get a hugely welcome treat in the form of Two Roads from the frequently neglected Believe before returning to Not of This World once more for a passionate rendition of Green Eyed Angel.

The arrival of Nigel Harris behind the drum kit signals a transition to early material with Fly High, Fall Far, Excalibur and Circus. More telling, however, is the revealing insight his arrival provides to understanding one of the reasons for their longevity.

Harris brings a rhythmic groove and nuance which is a noticeable change of style to the spirited and powerful vigour of current drummer Jan-Vincent Velazco. Looking back over the contributions of Fudge Smith, Joe Crabtree, the energising Scott Higham and the technical wizardry of Craig Blundell, the realisation dawns that the changing personnel seated at the heart of the band’s engine room have each brought a distinctive dynamism and artistry which has kept the sound fresh and original. 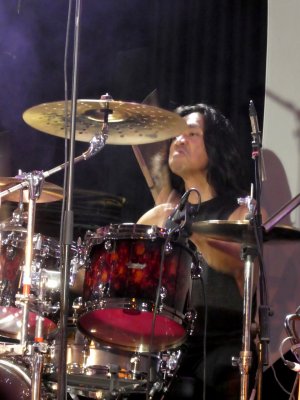 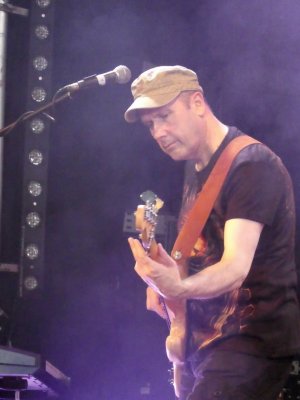 The impression is confirmed when the band is joined on stage by the effervescent Julian Baker sporting top hat and saxophone. His presence brings a further change of tone and style; a mesmerising Dark Summer’s Day, the wistful 2AM (with Nick singing while walking through the audience) and I Walk the Rope follow, a gentler and more pensive mood reflected in the music.

The set concludes with a fascinating and breath-taking contrast which provides yet another glimpse into the reason for their success. The wonderful intricacy behind The Queen of Hearts – the changes in tempo, the shifting moods, the articulate segues between the three parts – stands in delicious relief to It’s Only Me, released 17 years later, capturing the same emotional resonances but this time expressed cleanly and simply in a stirring and compelling finale.

Pendragon are the masters of adaptability. Believe (2005) marked a significant stepping stone in the evolution of their musical direction, one that grew and shifted again with Pure (2008) and more recently, Men Who Climb Mountains (2014). And as if to prove this very point, whilst Set One almost stubbornly eschewed the traditional Pendragon favourites, Set Two announced with exhilarating force and energy just where this adaptability has taken them. 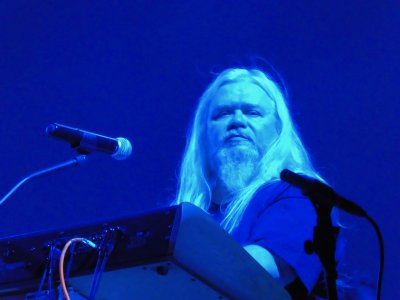 The Freak Show is a thunderous maelstrom of power, strength, direct energy; this is the kind of sound which would have been impossible in 1993 at the time of The Window of Life or three years later with The Masquerade Overture. And as if to prove the point, it is swiftly followed by Fallen Dreams and Angels along with Sister Bluebird from 1994, equally energetic, equally anthemic, but equally reflecting the more melodic styles and influences of its times.

By the time we hit Masters of Illusion, the hall is pulsating. Nor is it entirely surprising that we immediately jump 18 years forward for Faces of Light and what I have always believed to be Nick’s Coldplay moment (sorry Nick!) in the anthemic refrain following a reverberating guitar crescendo. Two quite brilliant songs which flow with intensity and exuberance, capturing the singular and instantly recognisable Pendragon signature sound, yet standing decades apart. It is truly a treat to see the band’s life’s work laid out so masterfully.

The encore is as demonstrative as it is fabulous. A delightfully growly Indigo – again capturing the influences of the times – is capped by the magnificent and heartfelt The Last Man on Earth. The closing lyrics bring a wry smile: “welcome to the show that never ends”. Judging by the joyfully shared passion between band and audience this evening, Pendragon continue to consistently inspire, impress and excite in equal measure. I’m looking forward to where the long and winding road will lead us next.

[Photos courtesy of Jamie Robertson, used with his kind permission.]

Set Two:
The Freak Show
Fallen Dreams and Angels
Sister Bluebird
Masters of Illusion
Faces of Light
The Last Man on Earth
~ Encore:
Indigo
Am I Really Losing You?