The Rhythm of Biz…

Arriving at this intimate venue down a side street in Dalston, one is immediately taken by the contrast with last year’s venue, where Magma blew the dust off the rather plush environs of Cadogan Hall in swanky Belgravia. Café OTO is a small… well, café-sized room with a barely raised stage at one end, which while empty was dominated by Christian Vander’s cymbal-heavy drum kit, exuding an air of quiet yet menacing confidence, even without its pilot at the controls. Tonight was the second of a three-night residency by the French sonic explorers, the total crowd over those gigs numbering around two thirds of last year’s single outing. Not as you might be forgiven for thinking unfathomable strange machinations by booking agents, but a deliberate move by the band to recreate the “residency” basis of live appearances familiar to their native French audience, and thereby introduce U.K. audiences to a new level of intimacy with this otherworldy music.

The crowd was a mix of fans of the band and bands as fans of the band, a lot of friendships renewed or made that were originally forged in zeros and ones, confirming that social meeja ain’t all bad. A friendlier vibe you could not conjure, the small venue size now making all the sense in the world. The drum kit knows…

The Rhythm of the Night…

At 9pm precisely the band arrive on stage to a tumultuous reception and launch into the live-only piece Theusz Hamtaahk and it is immediately apparent how tight this unit is as the music and driving heavy rhythms intertwine to produce an infinitely long rope strong enough to tow planets. Spying two or three of the band at a time by doing an occasional alien shimmy, I am spellbound by the dexterity of bassist Phillipe Bussonet, and the soulful vocals of Stella Vander and Isabelle Feuillebois are a true example of voices as instrument.

Strange things happen as the intensity rises during the second song, the band’s most well-known number Mekanïk Destruktïw Kommandöh. Despite the crowd being no less dense, the band are somehow more visible, as if by some odd magic they have rendered the bobbing heads in front of me transparent. Or perhaps more simply, the band and audience are now as one. The joy is in the ascendancy, and the venue has become a place of worship, the atmosphere climbing up and up into reverence. This is music that cannot fail to uplift even the weariest of trampled spirits.

New guitarist Rudy Blas, whom I read elsewhere is standing in for James McGaw who is in recovery from a serious illness (get well soon!), takes his parts with aplomb especially during MDK where he adds some fine avant squalling to proceedings. Christian Vander, at one with the drum kit that knows, naturally gives it his all, belying his advanced years.

After MDK has reached the stars and the applause and cheering has died down Stella informs us that “This is the point where we walk backstage and you all shout for more. Well, there’s nowhere for us to go so you can shout now.” And so shout we do, and the band launches into only the third song of their ninety-minute appearance, a storming rendering of Zombies.

Stella also informs us that next February the band are playing two nights at the legendary Paris Olympia with the 27-piece Metalïk Orkestraah, one date to which I have been fortunate enough to acquire tickets…bring it on!

More cheers, goodbyes to friends met, and we leave the venue still with our collective head in the clouds. A truly marvellous experience, and all the while the drum kit knew… 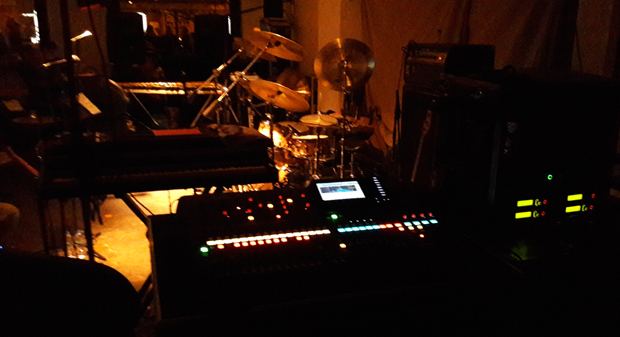