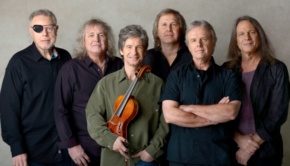 Kansas, who returned to the studio in January 2016 after signing with Inside Out Music, will release their highly anticipated... Read More →