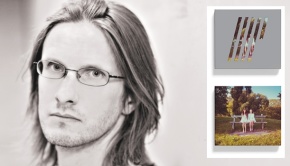 22nd January will see the release of a new Steven Wilson album “4 ½”, so titled because it forms an... Read More →