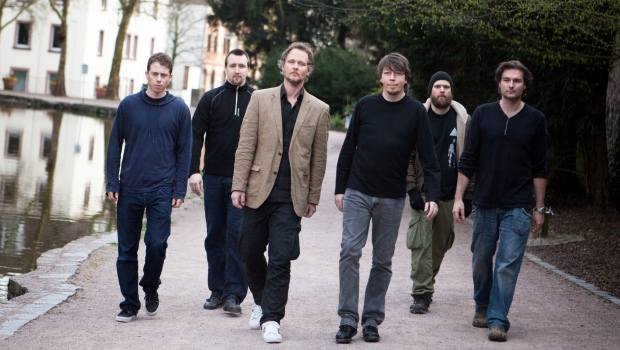 Norwegian art-rock, progressive outfit Gazpacho have announced details on their new album ‘Molok’ along with the bold claim that a code at the end of the CD could actually cause the destruction of the universe. Please see below for the science. Molok will be released through Kscope on 23rd October 2015.

If that wasn’t enough Norwegian music archaeologist Gjermund Kolltveit appears on the song “Molok Rising” where he plays his reconstruction of stone-age instruments making an educated guess at what the early songs of worship must have sounded like. This includes small stones, moose jaws and an assortment of flutes and stringed instruments. He also plays the Skåra stone, a singing stone which has a strong possibility of having been in use since the last ice age ended 10.000 years ago. Technically this means that the album uses the oldest original instrument ever recorded on an album.

‘Molok’ the follow up to their acclaimed 2014 album Demon sees the band continue to push the boundaries for creating the most complicated and strangest concepts for a record while simultaneously becoming the first band ever who are actively trying to destroy the universe with their album.

A small code that sounds like a strange noise at the end of the album will cause the correction software that runs in all CD players to generate a random number every time the CD is played. If that number should correspond to the actual position of all electrons in the universe then technically the universe could be destroyed.

Dr Adam Washington from the University of Sheffield confirms that this is science fact rather than fiction, ‘the random signal produced by the end of the disk contains enough bits of information to express a measurement of the total number of fundamental particles present in the universe.  If the noise actually contained such a measurement, and that measurement was performed rapidly enough, the universe’s total particle count could be fixed under the Quantum Zeno effect.  Locking the total particle count would prevent the pair production that forms a fundamental part of the decay of black holes.  Without such decay forces, black holes would remain stable forever, without the need for nearby matter or the cosmic microwave background to keep them fed.  This would greatly hasten the practical end of the universe.’

Of course you may wonder why a band would want to destroy the universe but as the band ask, ‘If it can be destroyed by such minute creatures within it, if it is just a chemical reaction, then does it have any spiritual value? In this scenario there is no good or bad, just an absence of meaning`

Across the album there are religious themes going head to head with modern day new science ideas and theories, Gazpacho’s Thomas Andersen states, ‘the album itself is about a man that sometime around 1920 decides that wherever anyone worships a God they always seem to be worshipping stone in some form. Whether it is a grand cathedral, the stone in Mecca or Stonehenge. God seems to have been chased by his worshipers into stone never to return. This harkens back to Norwegian folk myths where if a troll was exposed to sunlight it would turn to stone but it also reflects the way God has been incommunicado for a very long time.’

The band go on to say, ‘In a mechanistic view of the universe all events in the universe are a consequence of a previous event. This means that with enough information you should be able to calculate the past and the future and this is what he does. He names the machine ‘Molok’ after the biblical demon into whose jaws children were sacrificed because his machine crunches numbers. On solstice day he starts the machine and it quickly gains some form of intelligence as it races through history undergoing its own evolution.‘

Throughout ‘Molok’ the band focus on the idea that without God/a god to guide us, humanity is unsure of the meaning of life, that while we attempt to fill the void with other things we’ve still not found the answer and without a master to lean on we are very much alone in this universe.

On the album Gazpacho make a direct connection with history. Norwegian music archaeologist Gjermund Kolltveit appears on the song “Molok Rising” plays his reconstruction of stone-age instruments making an educated guess at what the early songs of worship must have sounded like. This includes small stones, moose jaws and an assortment of flutes and stringed instruments. He also plays the Skåra stone, a singing stone which has a strong possibility of having been in use since the last ice age ended 10.000 years ago. Technically this means that the album uses the oldest original instrument ever recorded on an album.

The band are also joined by world-renowned Norwegian accordion player Stian Carstensen who is a central member of Balkan-jazz orchestra Farmers Market.

Iamthemorning will be touring with Gazpacho