Thieves’ Kitchen announce their latest album The Clockwork Universe will be released on 23rd September 2015 and pre-orders have started through The Merch Desk on 23rd August 2015.

“The Clockwork Universe is an album exploring the human experience of a complex world. 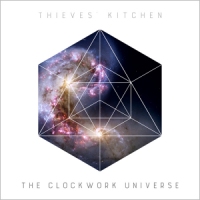 These are songs about people whose experience brings them into contact with a universe of science and learning, whether as a child (Prodigy), a neglected spouse (The Scientist’s Wife), young lovers (Library Song) or as a bystander confronted with the inexorable progress of industrialisation (Railway Time).

Two exquisite instrumental arrangements (Astrolabe, Orrery) bring to mind a bygone age of scientific exploration, and the candlelit solitude of the seeker.

The music is intelligent, substantial, dynamic and harmonically unconventional. Thieves’ Kitchen continues to display the inquisitiveness and sense of musical adventure seen in their previous album, One for Sorrow, Two for Joy.”