Jeff Berlin announces that he has teamed up with Pledge Music for the release of a tribute album dedicated to the late Jack Bruce. Songs For The Wailer will feature re-worked versions selected from Jack’s vast catalogue and includes guest musicians Ginger Baker, Allan Holdsworth, Paul Shaffer and Chad Smith – although it is anticipated that more will be added as the project develops.

Speaking of the project Jeff says: “When Jack died, my first thought was to honor his memory and record a CD of some of my favorite Bruce songs. We talked for years about recording a CD together, but sadly, time waits for no one. This CD will not be covers. I’ve arranged every song with fresh interpretations making sure that each song retained the original spirit that Jack included in every tune he wrote. This CD, to me, will be one of the freshest revamps of some of the best music that I heard from one of the greatest musicians of the last forty years.”

Jeff also comments: “Recording the music of Jack Bruce is much more to me than a project of love. It is maybe the most emotional recording project of my career. As a kid of 14, Cream utterly changed my life. Those live performances fit exactly with my budding interest in becoming a bass player. And Jack’s bass playing was astonishing. It was loud, in your face, and utterly musical. His bass playing kicked me in the gut and put me on the musical path I have pursued since those innocent days when I worshipped his playing, the only bass god that I ever had in my life.”

Next month also sees the ‘Sunshine Of Your Love’ special tribute concert for Jack at London Roundhouse on Saturday 24th October and in aid of Jack’s favourite charity, East Anglia’s Children’s Hospice (EACH). 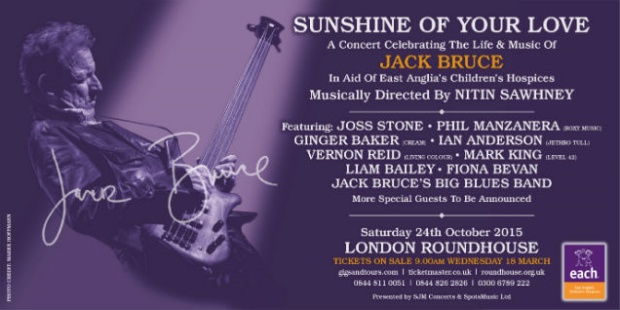