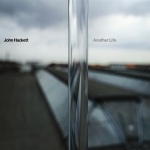 “I am delighted to announce the release of my new rock album “Another Life” on Esoteric Recordings (Cherry Red).

The scheduled release date is 25 September. This album is the follow-up to “Checking Out of London” with lyrics once again by Nick Clabburn. My brother Steve features on lead guitar with a special guest appearance by Anthony Phillips. The whole project is produced and mixed by Nick Magnus, also on keyboards, drums and programming.”

Nick Magnus added: “Thirteen songs, penned by John and lyricist Nick Clabburn, explore avenues of prog rock, art rock, pop, jazz, soul and folk, all tinted with their trademark sense of ‘noir’. A worthy successor to the acclaimed ‘Checking Out of London’, ‘Another Life’ will delight John’s fans, and is sure to win new ones.”

Taken from John’s Checking Out Of London