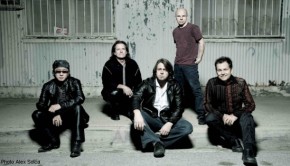 In April we revealed that Spock’s Beard would be releasing their latest studio album towards the end of August 2015... Read More →