KoMaRa’s self-titled debut album is based on a dark, deviant and explicit detective story. It reflects the mysterious circumstances of an abduction and the ultimate demise of the abductee. It’s a NSFW, Rated-R release designed for the open-minded and brave. Unnerving, haunting artwork by Tool’s Adam Jones further underlines the album’s provocative vibe.

The recording is predominantly instrumental but includes occasional vocals by Raineri, Leashya and Bill Munyon. Equally menacing, incendiary and vulnerable, they serve as interludes to either break or create moods and tension throughout. The album also has moments of light and hope, told through short trumpet vignettes by Raineri.

KoMaRa came together through social media with Kollar reaching out to Mastelotto on Facebook about potential gigs and recordings. Everyone was mutually intrigued and met up in Slovakia, where Kollar is based, in November 2014. The trio played gigs across myriad Slavic countries to enthusiastic, open minded audiences. The group then went on to record in Prague, capturing three long improvisations that formed the basis of the pieces on KoMoRa’s debut album. Acclaimed engineers Bill Munyon and Adrian Benevides also contributed to faithfully reflecting the release’s mercurial approach.

“For me, KoMaRa is the epitome of my belief that great records are like movies,” said Mastelotto. “The best musicians don’t need scripts because they understand the movie is always evolving. That’s the beauty of music too. It inspires its own script and cinematography in every listener’s head.”

Mastelotto is one of the world’s most celebrated drummers. He has been a member of every King Crimson lineup from 1994 to the present. In addition, he’s one third of Stick Men, a trio with Tony Levin and Markus Reuter. Mastelotto has also collaborated with Steven Wilson, Terry Bozzio, Trey Gunn, Allan Holdsworth, John Paul Jones, and Kimmo Pohjonen. 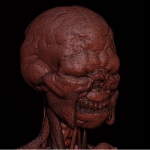