We reported back in January that David Cross & Robert Fripp, musicians who need no introduction here, would be releasing, Starless Starlight: “A beautiful and unexpected collision of violins and Soundscapes.” in May. Now confirmed, the album released through Noisy Records and available through Burning Shed will be available on the 4th May 2015.

Starless Starlight is “a fascinating album length exploration of a melody – composed by David Cross and Robert Fripp – that emerged as one of the key themes on the King Crimson masterpiece, Starless”.

“The melody resurfaced in two improvisations performed and recorded by Fripp in 2006 and these recordings plus the Starless theme itself were subsequently transformed and augmented by David Cross (and co-producer Tony Lowe).”

David Cross along with David Jackson (VdGG), Yumi Hara (The Artaud Beats) and Tony Lowe (Producer\Guitarist\Composer) will be performing tracks from the Starless album on 26th May 2015 at The Bedford in Balham. More about this can be found in the TPA News from April – HERE. 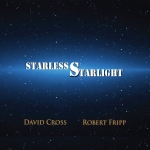