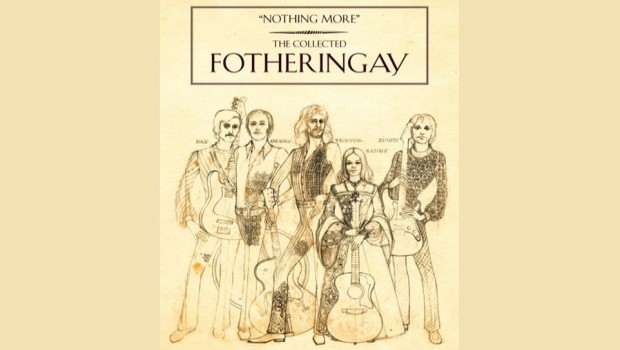 Universal Music announce the release of the “definitive Fotheringay collection”, Nothing More: The Collected Fotheringay, scheduled for release on 30th March 2015.

The four-disc set is the most comprehensive compilation yet of the group’s recordings, including hitherto unseen television footage, previously unreleased live recordings from a festival in Rotterdam (both from August 1970) and, for the first time, the official release of the seven existing tracks which Fotheringay recorded in session for BBC radio.

Fotheringay was the group formed by Sandy Denny and Trevor Lucas in January 1970, just weeks after she left Fairport Convention on the eve of the release of the landmark Liege & Lief.  Denny and Lucas recruited drummer Gerry Conway who had played alongside Lucas in Eclection before adding bass player Pat Donaldson and guitarist Jerry Donahue.

Fotheringay played its first dates on a concert tour in March 1970, recording their debut album over seven sessions between 18 February and 14 April. Simply titled Fotheringay, it proved to be the group’s sole album during its lifetime, released by Island Records in late June.  Statistically, it was Sandy Denny’s most successful post-Fairport album, spending six weeks on the charts and peaking at No. 18. It featured some of her finest songs and best ever vocal performances on the traditional ‘Banks of the Nile’, and her own ‘The Pond and the Stream’, ‘Winter Winds’, ‘Nothing More’ and ‘The Sea’.  Three months later, Sandy Denny was voted Britain’s Best Female Singer in the prestigious Melody Maker Poll, a feat she repeated the following year.

Although preparations began soon after to record a second album, it was abandoned in January 1971 when Sandy Denny announced she was leaving the group. Fotheringay played its farewell concert at the Queen Elizabeth Hall on 30 January.  It wasn’t entirely the end for Fotheringay. Following renewed interest in Sandy Denny and an unstoppable cult following in the decades since her death in April 1978, Jerry Donahue, Pat Donaldson and Gerry Conway carefully pieced together Fotheringay 2. They quite brilliantly assembled the aborted album from the 1970 master tapes and it was finally released some 34 years later. Fotheringay 2 was ecstatically received, not least for the inclusion of two more of Sandy Denny’s finest songs, ‘John the Gun’ and ‘Late November’ and superb arrangements, sung by Denny and Lucas, of the traditional ‘Wild Mountain Thyme’, ‘Eppie Moray’ and Australian bush-folk classic ‘Bold Jack Donahue’.

Both albums have now been gathered together on Nothing More: The Collected Fotheringay, each bolstered by a generous selection of demos, rehearsal tapes, alternate takes and mixes. The third disc combines a recording from a festival in Rotterdam in August 1970 with previously unreleased BBC session tracks, including Sandy singing a breathtaking, unaccompanied ‘Lowlands of Holland’. The final DVD disc is the real Holy Grail for her fans. The four songs recorded by the group for the German TV show Beat Club effectively double the existing footage of Sandy Denny in performance. Two of these, ‘Nothing More’ and ‘John the Gun’ were never even broadcast at the time.

Nothing More comes in hardcover book format complete with rare and previously unseen photographs of the band plus previously unseen original sketches for the Fotheringay cover by Marion Appleton, Trevor Lucas’s sister.  The package includes a new essay by Mick Houghton author of a new Sandy Denny biography I’ve Always Kept a Unicorn, published by Faber & Faber on March 5th.

Fotheringay’s recordings sound better with every passing year and the group is finally emerging from under the shadow of Fairport Convention; the Fotheringay musicians all went on to have successful careers, particularly as session musicians with the likes of Cat Stevens, Joan Armatrading, the McGarrigles and Gerry Rafferty. Trevor Lucas would go on to produce Sandy’s last three solo albums, two for Fairport Convention (which he and Donahue joined in 1972, Denny re-joining in 1974) and Rock On by The Bunch which featured all of Fotheringay less than a year after the split. More than anything, however, Nothing More: The Collected Fotheringay is particularly welcome for including so many crucial recordings from Sandy Denny’s remarkable career that was so tragically cut short.