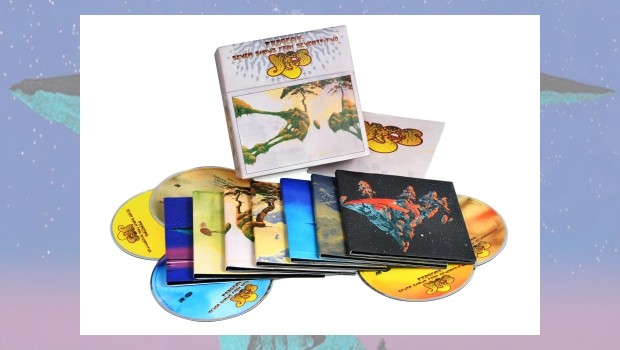 Yes will be releasing a mammoth 14CD collection of recently discovered complete live recordings from their 1972 tour of America and Canada. The shows are:

The band recently discovered recordings of seven complete concerts from the weeks leading up to the shows heard on Yessongs. The latest audio technology was used to restore the reel-to-reel recordings and bring out incredible sonic detail, creating an open, immediate sound that drops listeners right into the front row.

YES – PROGENY: SEVEN SHOWS FROM SEVENTY-TWO is a 14-disc set that holds every note from all seven shows, recorded in the fall of 1972 as the band’s tour jumped from Canada to North Carolina, and then Georgia and Tennessee, before their last stop in New York at Nassau Coliseum on November 20th. This comprehensive set comes in a cigarette-style flip top box with new artwork by Roger Dean. It will be released on 19 May 2015…

YES – PROGENY: HIGHLIGHTS FROM SEVENTY-TWO includes 90 minutes of live recordings selected from various shows. Available on two CDs or three LPs, the music flows like a typical setlist from the tour as it spotlights standout performances from different cities. The set will be released on 19 May 2015…

The Progeny editions are: Double-CD Disc | Triple-LP | 14-Disc Boxed Set. All will be officially released on 19th May 2015 through Rhino Records.

This was Yes’ first tour with drummer Alan White, who’s been with the band ever since. He replaced Bill Bruford, who recorded Close To The Edge before leaving to join King Crimson. White only had three days to learn the band’s live show before his first night on stage with Jon Anderson (vocals), Steve Howe (guitar), Chris Squire (bass) and Rick Wakeman (keyboards).

Recorded three months into the tour, these powerful performances attest to how quickly the new line-up came together musically as they navigate hits like “Roundabout,” and complex pieces like “And You and I.” Even though the setlist didn’t vary much from night to night, the individual performances are strikingly different.

Further details and the full story can be found HERE on the official YES website.