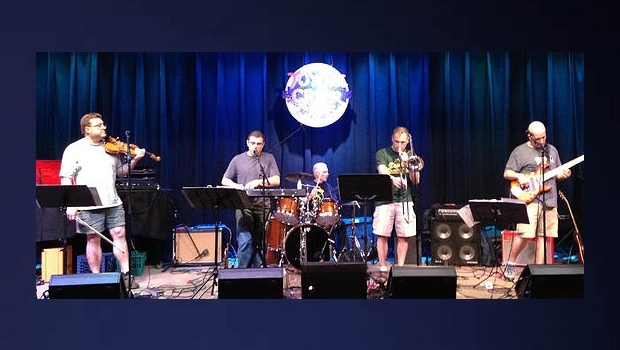 In a year that saw Frogg Café playing 27 shows up and down the East Coast and into Canada, “Admiral’s Picks: Volume 1” displays the band firing on all cylinders. These tracks were all performed live in 2005, from clubs to festivals. Extended flights of improvisation can be heard in “Moon Over My Hammy” and “Another Tsunami,” recorded live at the Oasis in New Paltz, sometime after 2am. The set includes “You Can’t Turn the Air Conditioning Off on a Fat Guy,” a sound-check jam, the world debut of “Dance,” and a rare unfinished “Candy Korn” that segues into “Questions Without Answers.” Additionally, “Happy Ending Shuffle” and “Reluctant Observer” feature what some die-hard Frogg Café fans call their favorite improvisations from the band to date.

“After hours of combing through much material that hadn’t been listened to by the band in close to a decade, we present to you Volume One of a new series of Frogg Cafe discography known as Admiral’s Picks,” says bassist Andrew Sussman. “We’re really excited to be bringing these recordings to our loyal fans.”

“We’re thrilled to bring the first in this planned series of live performances to the fans,” says 10T Records president, Steve Carroll. “Frogg Café has always been regarded as a stellar live performance act and these recordings really bear that truth out! I also think everyone will be very pleased with how affordably-priced we’ve made this full-length release.”