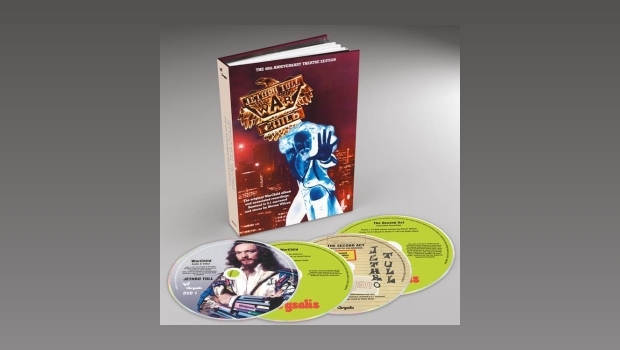 To mark the 40th anniversary of Jethro Tull’s War Child (1974), the album is to be re-released with bonus material on 24th November 2014 and in several expanded formats – 2CD/2DVD, 1CD, Digital Download. The original album and 3 bonus tracks have been remixed in 5.1 surround and stereo by Steven Wilson…

“Originally released in 1974, WarChild features one of the group’s most prolific lineups and includes Ian Anderson, Martin Barre, John Evans, Jeffrey Hammond-Hammond and Barrie Barlow. Unlike its predecessors – Thick As A Brick and A Passion Play – which featured 40-odd minutes of continuous music, WarChild marked a return to songs of a more conventional length, including the FM-radio staple, “Bungle In The Jungle.” The new Theatre Edition unearths a trio of unreleased recordings: “Tomorrow Was Today,” “Good Godmother,” and a different arrangement of “WarChild” recorded after the version on the final album.

Fans intrigued by the appearance of “WarChild Waltz” on the 2002 reissue of WarChild will finally get the chance to hear the rest of the mostly orchestral music the band recorded for the soundtrack album. About 30 minutes was recorded during sessions in 1973 and 1974. Soon after, the music was consigned to the archives for 40 years – until now.”

WARCHILD: THE 40TH ANNIVERSARY THEATRE EDITION will be available as a limited edition 2-CD/2-DVD set on November 24th.

Highlights from the set include:
– Original album and bonus tracks (three previously unreleased), remixed in 5.1 surround and stereo by Steven Wilson

– 10 orchestral pieces (nine previously unreleased) written for the film’s soundtrack, 4 of which are remixed in 5.1 surround and stereo by Steven Wilson

– “The Third Hoorah” promo footage, and footage from a January 1974 photo session/press conference where the WarChild project was announced.

– An 80-page booklet featuring an extensive article on the preparation and recording of the album, a film script synopsis, track-by-track annotations by Ian Anderson, plus rare and unseen photographs.

A new stereo remix of War Child will be released on CD (and digital formats) on 17th November 2014, along with a limited edition vinyl on 13th January 2015…