Eagle Rock will release Peter Gabriel’s latest DVD Back To Front on Monday 23rd June in the UK. Tuesday in America and other dates during the week for different countries…

The film captures Peter’s triumphant performance at London’s O2 recorded in October 2013 as part of his on-going Back to Front tour. The tour celebrates the album So, which is played live in it’s entirety, but also features many of Peter’s best loved songs (some in totally new acoustic arrangements) as well as previously unreleased and even unfinished material. Alongside Peter are long-time band mates Tony Levin and David Rhodes, as well as David Sancious and Manu Katche who made up the original So touring band of 1986 & 87. 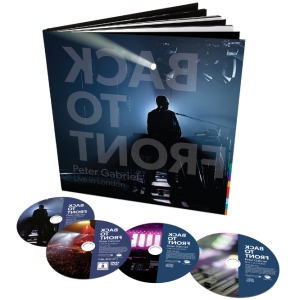