The Fierce and the Dead have developed into a great band over the last couple of years and having seen them previously on the Stabbing A Dead Horse package with Knifeworld and Trojan Horse I was really looking forward to seeing them again, particularly as last year’s Spooky Action album was such a winner. As it turned out TFATD were not the only delight on offer this evening.

The Moon Club is a very friendly little place above a couple of bars just across the road from the famed Clwb Ifor Bach, a cosy chillout room at the front overlooking the street with the stage tucked away in the back. The capacity is certainly small but the enthusiasm of those who turned up cannot be denied. With a start time after 8 o’clock and three bands – all completely instrumental – to fit in timings were going to be pretty tight but all ran smoothly. Probably due to not having any of those pesky vocalists to soundcheck!

First up were Thorun, a band from the Cardiff area who I had not previously heard comprising the twin guitars of Keeran Williams and new man Neil Smith with Neal Palmer’s low-slung bass and drums from Mike Johnson. The postage stamp sized stage of The Moon resulted in the bass and one guitar using the floor space in front in order to give everyone the necessary space. From the off their blend of doom metal with a great groove and riffs aplenty was very appealing and a fine start to the evening. Their music is muscular, rhythmic and catchy as hell and they got it across well to the small crowd who just lapped it up. With their third album, Festival At Fires Peak, just released this is a band to watch and a very enjoyable live proposition should you be partial to a bit of doom laden, Sabbath influenced riffery – and with titles like Look Mom, I Made A Death Machine they can’t go wrong!

It was a humid evening and the room was getting quite warm but after a quick change over The Fierce and the Dead hit the stage for an hour or so of their finest recorded moments, fresh from their appearance the previous weekend at the Celebr8.3 festival in London. Starting with the opening triple punch from Spooky Action in the shape of Part 4, Ark and Let’s Start A Cult, anybody who is familiar with Spooky Action will know how visceral and in your face these songs are and live they simply batter the audience into submission at the start of the set. Matt Stevens’ guitar is all over the place, locking in with Steve Cleaton as the rhythm section of Kev Feazey and Stuart Marshall nail down the bottom end keeping the drive and interest levels high. Again, the limitations of the stage resulted in Stevens spending much of the time on the floor in front of it ripping all kinds of solos out of his instrument. His energy levels just didn’t waver throughout the set. 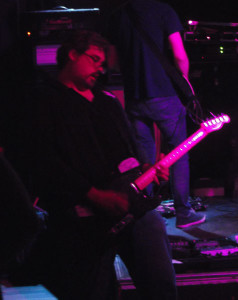 Next up one of my favourites, Flint, the opening track from their debut album If It Carries On Like This We’re Moving To Morecambe. After a looping guitars and laid-back bass intro Marshall excels with a scintillating rhythm that drives the track along and allows the guitars to add the haunting melody line. The two elements of this track combine beautifully.

Unsurprisingly the rest of the set is heavily biased towards Spooky Action with the twinkly melody of the title track followed by tracks 4 and 5 from the album, the sinister Pyramid Hat, where Cleaton and Stevens wind their guitars around each other, and I Like It, I’m Into It which is thumping and funky. A terrific Chief closes out the selection from Spooky Action before 666…6 from the On VHS EP – a song that has pretty much become the band’s anthem – merges into a flailing Landcrab which sees Stevens soloing like a madman – including briefly playing behind his head – over the frantic rhythm section. Eventually he finds himself laid out on the floor in front of the stage – still playing – much to the hilarity of the appreciative crowd who responded with huge applause at the end. A thoroughly enjoyable set from a great live act.

Well, TFATD are who I had come to see but that was not all the evening had to offer; time for a quick sit down as Anta set up. Another band I had not previously heard they were highly recommended by Matt Stevens and I was keen to see what they could do. The set up of guitar, bass and drums with organ/synth was a bit different and once they got going the sound they generated was nothing short of awesome.

Starting with a currently untitled new song they were immediately fascinating, the keys adding an air of Gothic mystery to proceedings. The 10 minute Cenotaphium 1 from latest release Centurionaut certainly blew any cobwebs away, this is an idiosyncratic but intrinsically powerful take on space rock, the keys of Alex Bertram-Powell leading the melody as guitar and bass match each other through rhythmic intensity and fiddly passages that move the music on and keep it memorable. The whole is stately and impressive but imbued with an inner evil and as the set progresses it occurs to me that Anta are probably the most ‘Epic’ sounding band I’ve ever heard. 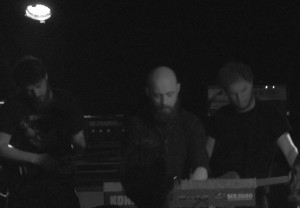 With key and time changes sweeping the pieces along, the unusual playing style of bass man Joe Garcia stands out. He plays with his left hand over the top of the fretboard – I’ve not seen that before – but it doesn’t hamper his movement and he plays some great stuff. Drummer James King plays like a demon and deploys the handily placed gong to good effect, a nice touch that certainly works well within Anta’s sound. The organ is superb throughout and adds a classic ’70s touch although this is no retro band, their aim is clearly for the future and beyond. Though dense this is not just about intensity and the textures evolve quite beautifully – some of them quite terrifying in their malicious intent.

Other than the new song the rest of the set was taken solely from Centurionaut and builds to some fantastic climaxes, concluding with the wall of noise finale to Cenotaphium II that left everyone present stunned. I loved it, a fine way to end the night and I hope to see them again soon. There is a confidence about their delivery and some unique touches that helps their music stand out.

Three very different bands each ploughing their own furrow of instrumental mayhem – all of them very successfully. A great showcase for guys who enjoy doing their own thing and it was nice that so many came out to see it happen on a mid-week night. There could have been more present but this is always going to be something of a niche experience.

Revenge of Gaia
Look Mom, I Made A Death Machine
Growth of the Soil
The Cult of Saturn
God Particle
Hipster Circle Pit

Part 4
Ark
Lets Start A Cult
Flint
Spooky Action
Pyramid Hat
I like It, I’m Into It
Chief
666…6
Landcrab

[Thanks to www.allthebeesaredead.com for the videos]