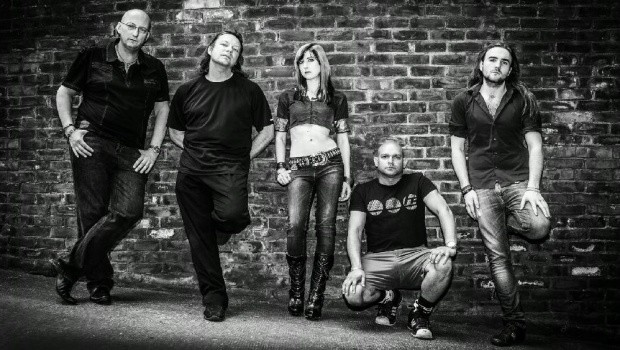 Touchstone have announced the release of their first live DVD, Live Inside Outside, which is scheduled for June 2014. As yet a full track listing has not been made available however the mainstay will be the band’s show recorded at Bilston’s The Robin 2, in October 2013 on the Oceans Of Time album launch tour. Also included will be the whole set from the High Voltage Festival, filmed at London’s Victoria Park in July 2010; “a 30 minute performance including songs from their first two studio albums, 2007 release ‘Discordant Dreams’, and their 2009 release ‘Wintercoast’, featuring a voice over by Oscar winning actor, Jeremy Irons”.

Live Inside Outside will include interviews, other as yet unseen live footage and a “making of” section showing the writing, rehearsing and recording process for the Oceans Of Time album. The main gig footage has been recorded and edited by Rob Reed with the sound recorded directly from a mobile recording studio at the gig, by Chris Lynch, and is being compiled and mixed by Rob at his Cardiff studio.

Touchstone comprises of Kim Seviour on lead vocals, Adam Hodgson on guitars, Rob Cottingham on keys & vocals, Moo on bass & vocals and Henry Rogers on drums. Touchstone were labelled as one of the bands at the forefront of the “New Wave of British Prog”, and have enjoyed great success and rave reviews over the past 8 years, and have earned a reputation for being a great  live band.

Kim, is currently running a personal campaign to raise awareness for ME (from which she has suffered for 4-5 years). She finds that music has a big benefit on ME and her general well being.

To support the launch of the DVD, Touchstone will be playing 3 shows in June 2014.

Each of the 3 performances will feature a 90 minutes set from Touchstone  spanning songs from all of their releases, and also full support bands at each venue too. The DVD will be available to purchase at each gig, and there will also be a limited edition pre-order available.