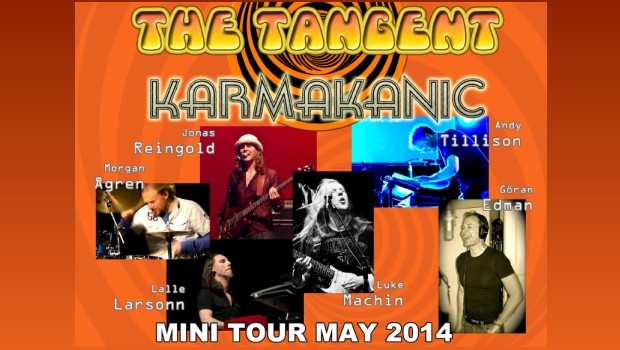 The Tangent and Karmakanic. Two bands who have spent an decade building several reputations. As great Progressive Rock Bands in the main flow of that genre – sure. As musical fireworks displays, certainly. But also for their unpredictability – forays into jazz, left of centre material, sudden desires to write symphonies, be weird yet Rock Out and laugh with the best of them.

The band’s reputations are mainly secured by their recorded output. Their gigs have been few and far between – mainly due to the logistics involved. But every once in a while they make a foray out onto the stage. And this Spring is one of those times. Hooking up with each other, the short Karmakanic/Tangent European mini tour will take in Sweden, Germany, The Netherlands and the UK. A unit of six people will perform the music of both bands and feature music from the decade of music that each has contributed to the scene.

Both bands will premier new compositions at the gigs, both bands will be available to chat to at all the venues without any costly “Meet & Greet” schemes. The events are designed to be a friendly celebration of the history of these bands so often thought of as spin-offs of other projects but who have proved their own identity to their fans time and time again.


Andy Tillison (Keyboards & Vocals) and Jonas Reingold’s (Bass Guitar) dreamteam is made up by regular members of one – or the other – or both the bands:

Intimate gigs in Europe followed by a major festival appearance in London UK – Celebr8.3 where the bands will share the stage with the likes of Frost*, Anathema, Twelfth Night, Cosmograf, The Fierce & The Dead and a boatload more. Don’t miss your chance to see this rare event!