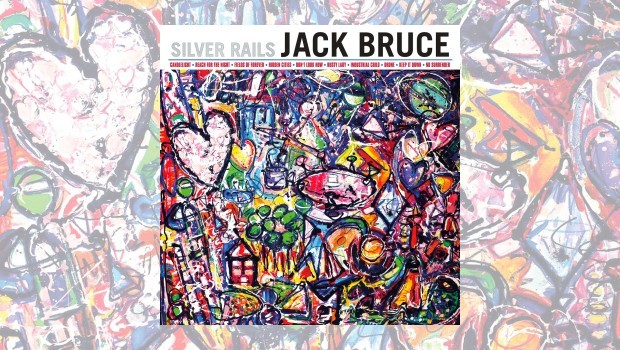 Esoteric Antenna is proud to announce the release of the eagerly awaited new studio album by the legendary JACK BRUCE, one of the greatest popular musicians Britain has ever produced. A supremely talented instrumentalist and vocalist, eminently respected by his peers, Jack’s pioneering bass playing style has influenced successive generations of bassists, including such luminaries as Paul McCartney, Jaco Pastorius and Sting, alongside more contemporary musicians such as Flea of the Red Hot Chilli Peppers. He is also the possessor of one of the most powerful voices in modern music and a composer of some of the most original and influential music of the past forty-five years. As a songwriter he has written some of popular music’s enduring classics such as “Sunshine of Your Love”, “White Room”, “I Feel Free” and “Theme from an Imaginary Western”.

Released on 24th March 2014, “Silver Rails” is Jack’s first album in ten years, recorded at the world famous Abbey Road studios.  Produced by Rob Cass, “Silver Rails” is a splendid collection of carefully crafted songs written in partnership with lyricists Pete Brown, Kip Hanrahan and Margrit Seyffer. He is joined on the album by a host of celebrated instrumentalists including Phil Manzanera, Robin Trower, Bernie Marsden, Uli Jon Roth, John Medeski, Malcolm Bruce and Cindy Blackman Santana. “Silver Rails” is the next chapter in the recorded legacy of one of popular music’s most respected innovators.

The sleeve art work for the album was designed by Sacha Jafri in the style of a 1950s Columbia Records Jazz Album.

Silver Rails will be available as a Single disc (jewel case), Limited Digipack 2 disc deluxe edition with DVD of “The Making of Silver Rails” and Limited 180 gram vinyl LP edition.