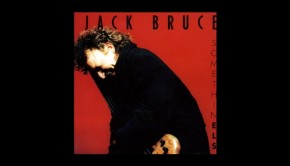 Jack Bruce’s only album between 1980 and 1987, the year the Somethin Els project was started, was the atypical electronica... Read More →