Dutch Symphonic metallers  reveal the artwork and track listing for their sixth studio album to be released through Nuclear Blast Records on the 2nd May (Europe), 5th May (UK) and 13th May (USA). The Quantum Enigma will be available in five different formats… 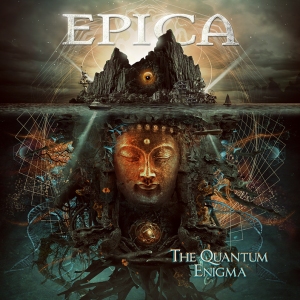 “Where Retrospect reflected on the first decade of our carreer, we’d like to think THE QUANTUM ENIGMA marks the beginning of a new era, where Epica sounds heavy, modern and without compromises! More than ever, the creation of this album was a group effort and we are extremely proud of the results!

Together with producer Joost van den Broek we recorded this album in the Sandlane Recording Facilities in The Netherlands whereas the mix of the album was done by the renowned Jacob Hansen.

“Every detail finds its way into a perfectly balanced mix, and makes EPICA sound raw and overwhelming.”

Long time collaborator Stephan Heilemann once again created some stunning artwork to accompany the ideas behind the lyrics. Once you’ll be able to lay hands on the album artwork, you’ll see that the cover is part of a bigger picture.

The band will return to the stage after almost a year of absence during which they focussed on recording the career-defining The Quantum Enigma. EPICA’s first performance will be the album release show on the 30th April in the 013, Tilburg in their home country The Netherlands.”