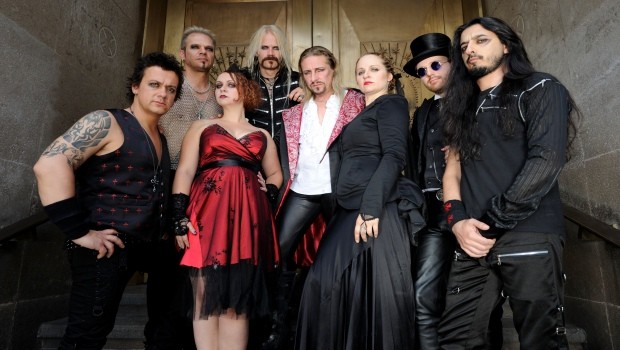 Swedish symphonic metallers Therion are set for three releases during 2014. Their latest studio, the follow-up to the ambitious Les Fleurs Du Mal (2012), will be released towards the end of 2014, however ahead of this will be a re-mastered deluxe edition Theli (1996) and a three disc DVD entitled Adulruna Rediviva And Beyond…

ANNOUNCEMENT (via Facebook): On February 21st there will be two new releases of THERION coming up, the deluxe edition CD + DVD of their all-time classic »Theli« as well as a 3-DVD package (limited edition incl. bonus DVD) called »Adulruna Redivia And Beyond«.

»Theli« was the fifth studio album of THERION, being released on August 1996. The successful album features THERION’s legendary hit ‘To Mega Therion’ as well as the outstanding 10-minutes epos ‘The Siren Of The Woods’ and the hymn ‘Cults Of The Shadow’. It features two different choirs and a.o. Dan Swanö from EDGE OF SANITY as a gust singer.

The deluxe edition of »Theli« has three more bonus tracks: ‘In Rememberance’, ‘Black Fairy’ and the SCORPIONS cover version ‘Fly To The Rainbow’ as well as a bonus DVD with the entire album performed live.

On top there will be a double live DVD + bonus DVD, limited edition Digipak called »Adulruna Redivia And Beyond«. The two shows were recorded live in Atlanta in 2011 and in Budapest 2007.

“The concert recorded in Hungary was a concert on the “Adulruna Rediviva” 20 year Anniversary-Tour in December. The idea of the tour was to play the entire Theli album + a set consisting of songs that the fans had voted for on the band web page. Piotr Wawrzeniuk and our old friend Messiah Marcolin joined in to make this evening extra special. The concert in Atlanta was the band‘s only show in the USA since 2007 and was shot during the band‘s headline performance at the ProgPower festival 2011”, commented the band.

“011 is the name of a board game made by the italian game manufacturer Scribabs. In a very ambitious way to market the game, they made this fantastic short film, starring the band members as actors, playing their roles in the game. The main man behind the game and the film, Paolo Vallerga, is currently writing a novel on the story behind the game and there are even some plans for a movie. To learn more about this great game and to purchase it, please visit: http://www.scribabs.com/
Amazing Voice is a japanese TV-program about great singers. This episode had Thomas Vikström as main focus and the TV-team flew to Sweden to interview Thomas and record some live singing exclusively for the program.”