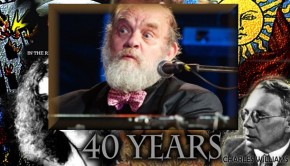 The Enid will be celebrating their 40th year in 2014 and to mark this event they will be releasing a three... Read More →