Marillion’s Steve Rothery, who coincidentally celebrates his birthday today, has started a Kickstarter campaign to raise funds for a solo album, The Ghosts of Pripyat, scheduled for release in September 2014…

“After putting together an amazing band to play the Plovdiv guitar festival I’ve decided to finally record my long awaited solo album! 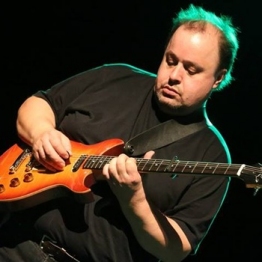 I had an offer to record a solo album from EMI during the recording of Misplaced Childhood in 1985. However it led to a strong disagreement within the band and the idea was shelved. While recording the Brave album at Miles Copeland’s chateau in France I was offered a deal to make an instrumental album for his “No Speak” label, however, I decided to record the first Wishing Tree album instead. Fast forward another twenty years and I’m invited to play at the annual Plovdiv guitar festival in October 2013. Having committed to the festival it left me with the small problem of what to play for an hour. “Blues in A” just wasn’t going to cut it. I had a few strong ideas and got together for a couple of writing sessions with my good friend and fellow guitarist Dave Foster. Dave and I have a great musical chemistry which brought forth a lot of amazing music. After a couple of days rehearsal with the fantastic rhythm section of Leon Parr and Yatim Halimi I realised this was going to be something really special. The live album and video from the performance gives you an idea of where the finished album, “The Ghosts of Pripyat”, will go.

The album will also feature guest performances from some of my musician friends including Steve Hackett on “Morpheus” and “The Old Man of the Sea”. Lasse Hoile is designing the artwork so it’s going to visually stunning as well.”