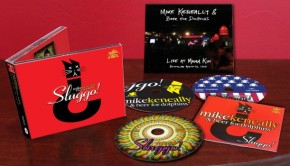 Earlier this year Mike Keneally released his 24th solo album, the excellent You Must Be This Tall. In December however... Read More →