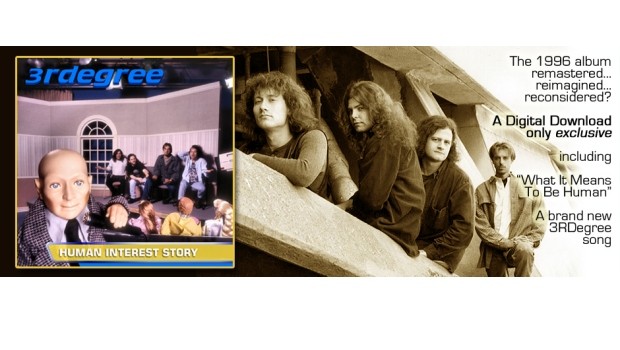 10t Records‘ Steve Carroll has revealed the re-mastered, digital download re-release of 3RDegree‘s second studio album Human Interest Story (1996). The album will be available on 10th December 2013 and widely available through all major download outlets.  Check out the album HERE.

“Before American progressive rock band 3RDegree came to the consciousness of the worldwide prog rock press with the 2008 album NARROW-CASTER and its follow-up release, 2012’s THE LONG DIVISION, the band knocked around the New York City area from 1990 to 1997 with little notice. They put out 2 albums during this timeframe, the second of which, 1996‘s HUMAN INTEREST STORY, was a particular milestone.

Having just added lead vocalist George Dobbs the summer before, the album’s April release was the culmination of 3 solid years of writing and recording to which Dobbs added his golden pipes in the 11th hour, taking over the spot from bassist/keyboardist Robert James Pashman. ”I was more than happy to relinquish the lead vocals in exchange for a better band and a less busy me!” says Pashman.” Read 10t Records’ full article at THIS LOCATION