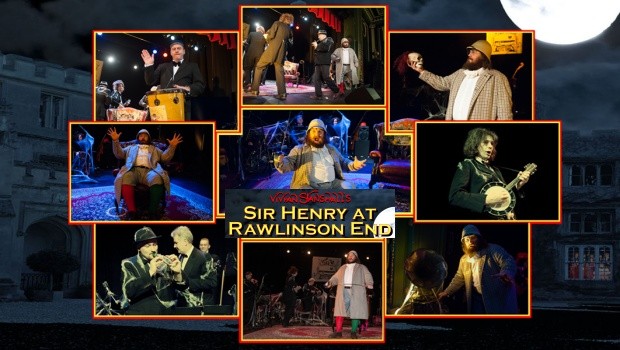 Following on from last year’s sell concert, marking what would have been Vivian Stanshall’s 70th birthday, is the announcement that Michael Livesley will return to London’s Bloomsbury Theatre next year. Under the title, One Night Stanshall the concert will comprise of the complete performance of Vivian Stanshall’s Sir Henry At Rawlinson End.

The one off concert will take place on 8th April 2014. Visit the Sir Henry Lives website for more information…

“The evening will comprise a complete performance of Vivian’s Meisterwerk Sir Henry at Rawlinson End performed by Michael Livesley and also performances of many of Vivian’s songs by a super-group of Vivian’s musical collaborators such as Neil Innes, Rick Wakeman, Danny Thompson, John Halsey, Jim Cuomo, Susie Honeyman and John Megginson. It promises to be an unmissable evening of jaw-dropping entertainment!”

“Here are some of the things said about last year’s show;

“What a night, an ensemble of madmen at their best, smashing!” Rupert Stanshall, Vivian’s son
“Rare facility and nimble erudition, as powerful an experience as one could wish for outside Hallucinogens!” Danny Baker, broadcaster
“Mike is absolutely remarkable. I’m thankful that Mike keeps the memory of Viv well and truly alive for all of us.” Danny Thompson, musician
“Wonderful night at the Bloomsbury Theatre. Honoured to be a part of it.” Rick Wakeman, musician
“Such fun – still grinning!” Neil Innes, musician
“Sir Henry’s bluster and his epic lack of drawing room manners are still winning fun. All very odd, all very Stanshall!” Clive Davis, The Times
“Livesley’s performance gives weight and truth to that old theatrical cliché, ‘a comic tour-de-force’.” Andrew Male, MOJO”