Updated – 30th September 2013:
Ahead of the release date for the Live In Europe DVD, Flying Colors have posted All Falls Down, taken from their debut album, as a teaser…

…along with this the band have also posted a version of Dixie Dregs’ Odyssey, written by Steve Morse and taken from the band’s 1978 classic What If album 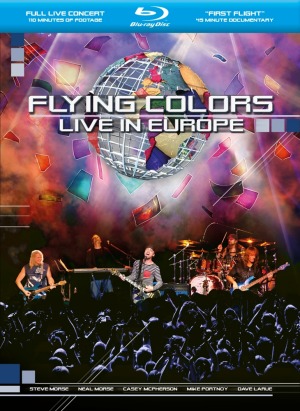 Classic Rock Magazine have an exclusive premiere of, The Storm, a track taken from the concert. You can view it HERE.

Live In Europe will be available on DVD, Blu-Ray, 2CD, limited-edition triply vinyl and digital formats…

“Live in Europe is the (so far) definitive Flying Colors live experience, capturing the band in their native habit—on stage. Directed by Bernhard Baran (Guns ‘n’ Roses, The Cure, Porcupine Tree), the band is shown in all its glory and madness. Our label said it was filmed on September 20th, 2012 at the lovely 013 venue in Tilburg, Holland; we believe them.

This one is so titanic it had to be released in a half-dozen formats: 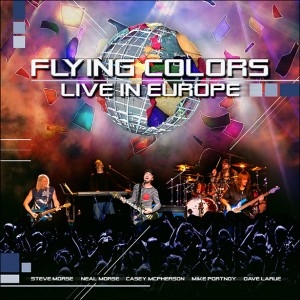 The concert release captures the band live in Tilburg, Netherlands at 013 on September 20, 2012. Directed and edited by Bernhard Baran (Guns n’ Roses, The Cure, Porcupine Tree) with Bill Evans as executive producer, the concert presents the entire studio album, alongside popular favourites performed by the individual members of the band.