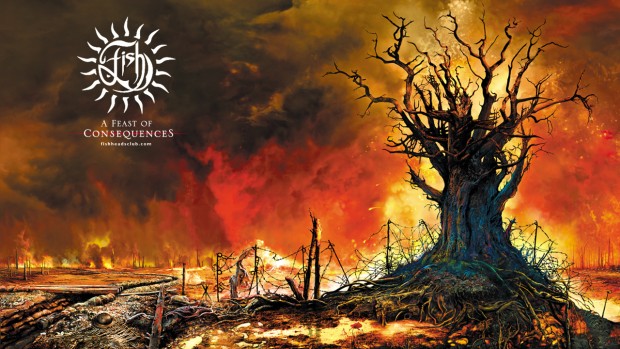 In one of Fish‘s customarily detailed news updates he has apologised for the now inevitable delayed release of the deluxe issue of A Feast of Consequences album. Beyond his control and pertaining to issues with the printing, the album has undergone a series of delays. The FLAC downloads and CD jewel case versions of the album will be available circa 14th September, however the ‘deluxe’ edition is now looking more likely towards the end of September.

“It’s hard to express exactly how I feel after yesterday’s news. I am a mixture of angry, probably on the edge of livid, and depressed, being close to tears at one point. I am also embarrassed as I have to let down a large number of people who have given me nothing but their total support in recent months.

I haven’t been posting or blogging as much in the last week or so as Mark Wilkinson and I have been trying to sort out a major problem that has crept up on us and which is now unavoidable.

In May this year Mark and I agreed to quotes for the deluxe edition of “A Feast of Consequences” with a company called MPO. Mark discussed at length the printing details and delivery times with the companies UK representative and we were told the turnover for the entire project would be 4 weeks but that we should build in a week’s leeway.

It was important to hit all the schedules and on our part the artwork was delivered 2 weeks early, the DVD a week early and the album master bang on time to hit all production times for an agreed delivery to us here at the studio on the first week of September

I had already booked a European tour a year before and arranged all the album recording and production schedules to enable me to have the standard and deluxe versions on the road to sell. Once I knew the delivery date of the album I put it up for pre order and I have sold to date 4200 copies of the deluxe edition the packages for which are all here, ready and waiting in the control room.”